Average house prices close to Premier League football grounds have increased by 129% over the last ten years, according to research by Halifax.

The average house price in the surrounding postal districts of the 20 clubs contesting the Premier League for 2014/15 is now £329,520 – a third (£79,918) higher than the average for the whole of England and Wales (£249,601) – and more than double the 55% increase in house prices across England and Wales as a whole over the same period.

The biggest increases in value have been seen in homes close to Manchester City’s Etihad Stadium, where the average home value in this postal district has risen by 150% over the decade rising from £39,193in 2004 to £98,178 in 2014.

Newcastle United finished bottom of the Premier League house price table with the average value of properties close to its home ground falling by 22% between 2004 and 2014; the only stadium to record a decline in prices over the past decade.

Despite not seeing the largest percentage increase in prices, the postal district covering Stamford Bridge (SW6) is the most expensive area to live in currently, with an average house price of £959,522. This is more than fifteen times the average price in the least expensive Premier League postal district of L4: home to both Liverpool and Everton Football Clubs where the average house price is £62,416. 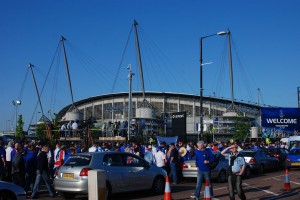 At £329,520, the average house price outside a Premier League ground in 2013 may not stretch a Premier League footballer (as average wages reportedly topped more than £30,000 a week in 2013) it’s a different story for everyone else, as this is ten times higher than national average gross annual earnings.

However, at the other end of the league, the postal district L4 – home to Liverpool and Everton Football Clubs – is the most affordable Premier League postal district with the price of the typical home just over double (2.2) gross annual average earnings.

“With the Premier League hailed by many as the best in the world, for many clubs some of this success also seems to have rubbed off on the surrounding areas. In the last decade average house prices immediately outside some of the country’s leading clubs have seen price rises that far outstrip the rest of the country.

“There is no rule governing why some areas have seen greater price rises than other. Some areas – but not all – have benefitted from clubs moving to a new stadium and all the infrastructure improvements which are associated with this. And neither is success on the pitch a guaranteed boost to house prices either, with only two of the top five areas being able to boast Premier League winners in the last ten years.”

Next Mayor of London must commit to building 50,000 homes a year – CBI

Marketing taboos: why now is the time for change