After some encouraging signs in November, retail sales in December have failed to bring relief to the high street.

While it was an underwhelming Christmas for most, there were pockets of good news.Homewares saw an increase of 8% year on year, although this was flattered slightly by weak like-for-like figures in 2012. However, sales of items such as Christmas decorations and tableware helped bolster this section of the high street as consumers prepared their homes for entertaining over the festive period.

Last minute present shopping saw non-fashion sales pick up in the final week, offsetting a weak start to the month, but finishing up 2%. Fashion sales were down 4.6% overall with poor weather and savvy bargain hunters hitting the sector particularly hard. Although pre-Christmas discounting saw sales pick up slightly at the very end of the month this was too little too late.

Non-store sales were the real stars of Christmas however, with overall sales up 31.1% on 2012. The week before Christmas saw non store sales increase 55.7% – an impressive figure against a strong like-for-like. 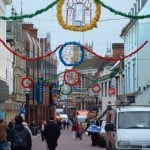 "As anticipated, online sales and 'click and collect' were the real success stories this Christmas and these figures illustrate just how critical it is for retailers to invest in online routes to market. Many retailers will feel disappointed with reduced footfall in stores but when the technology is right this shows that this need not be a disaster.

"The big rise in the last week of December when we started to see discounting shows that consumers are prepared to hold out until the last minute to pick up a bargain. This suggests that the January sales will encourage shoppers to part with their hard earned cash but there is little room for complacency. January is a cruel month for the high street as retailers are usually sitting on high cash holdings and low stock levels so they are particularly exposed at this time of year."

Political risks are clearly elevated heading into 2015, highlighted most notably by developments in Russia last week

Motorcycle Manufacturers Up the Ante on Buyer Incentives