Retailers have yet to see a rebound in high street sales in the run up to Christmas, according to new figures released today by business advisory and accountancy firm, BDO LLP.

The figures also show that sales improved marginally during the second week of December – total sales fell by 4.1% during the first week of the month and by 1.1% the following week – suggesting that the price promotions introduced in the past few days are beginning to have an effect on consumer spending. But will they be enough?

Department stores have been the winners so far, with shoppers valuing the convenience of having a range of items in a single location. Homeware sales have remained strong throughout the entire pre-Christmas trading period, although the comparison is flattered by the weak sales recorded over the past few years.

Fashion has proved particularly challenging except at the top end, where luxury retailers have seen buoyant demand. 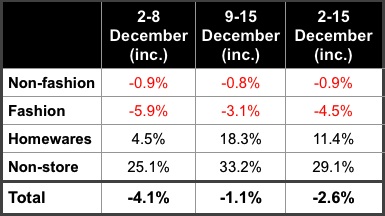