Having blown away the crowd supporting rock heavyweights Kings of Leon and Pixies at BST Hyde Park this July & following the success of their last UK tour which concluded with a raucous sold out show at Camden's KOKO, the Brooklyn natives have revealed details of their biggest UK tour yet next January & February, including their largest London headline show to date at The Forum. Tickets are on sale from 10am on Friday 14th July and will be available from http://highlysuspect.net/.

Highly Suspect recently revealed the video for 'Little One', watch the video below. 'Little One' is the second single from the band's critically acclaimed sophomore album, 'The Boy Who Died Wolf', which debuted at #1 on the Current Alternative Album and #2 Rock Album on the Billboard Charts in the US last November.  The moving, euphoric LP showcases a stronger, livelier and more mature sound than their debut, displaying influences from the likes of Queens of the Stone Age, Jack White and In Utero-era Nirvana. To date, the album has spent over 30 weeks on the Billboard charts.

'Little One' is the follow-up to the band's breakout hit 'My Name Is Human' which spent 9 weeks at #1 on Billboard's Active Rock Chart, reached Top 15 at Alternative Radio and was nominated for a Grammy in the 'Best Rock Song' category among legends like David Bowie, Metallica and Radiohead – the band's third Grammy nomination in 2 years following two nominations for their debut album 'Mister Asylum' in 2016. 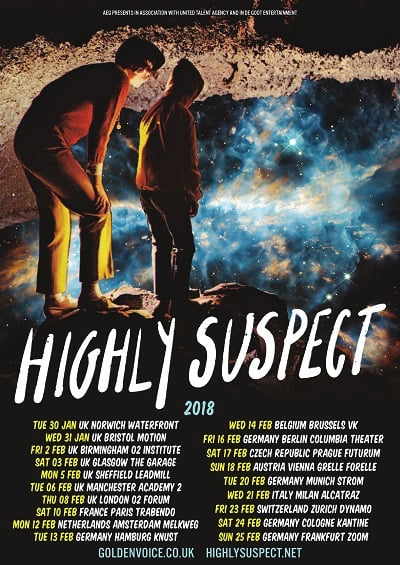 "The hottest band on the planet" – Kerrang

"You need this band in your life" – NME

Sherlock Holmes: A game of Shadows – The return of the Baker St. Boys