Events in what once would have been regarded as a far-off land now reach our television screens or our mobile phones in seconds, and it is not much later that the consequences start to be felt on our shores.

And it does not matter whether human beings moving across the globe are fleeing war or persecution, the effects of climate change – too much water, not enough water – or simply seeking as human beings have done throughout the course of history the chance of a better life, we are going to have to deal with the consequences.

We are 7.2 billion people on this small and fragile planet of ours. By the end of this century we are forecast to be 11 billion.

We only have to look at what has been happening on our continent these past few months to see what that future could bring. The flow of refugees has put the Schengen agreement under enormous strain and has tested Europe's solidarity to the limit. But imagine what would have happened – what would be happening now on the continent of Europe – if the European Union did not exist. 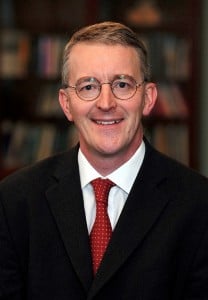 The fact is that in Europe, as elsewhere in the world, we not only have a moral interest in preventing conflict, stopping dangerous climate change and promoting economic development to overcome poverty in developing countries, but also a practical interest in doing so.

And to succeed in these tasks we have to make the global institutions we have created work to deal with all of these things.

The choice is very simple. Either we seek to do so in cooperation with our neighbours, near and far, through bodies like the European Union and the United Nations, or we will struggle to deal with them separately.

So we must choose between the fear that we have somehow lost our identity, our influence and our place in the world because we have chosen to be part of the European Union, and the experience that being in Europe has actually amplified, extended and increased Britain's voice in the world.

And in so doing it has given us the best means we have of dealing with the problems we face.

He will argue that his time in government illustrate how the EU strengthens the UK's voice:

In 2005, when the Labour Government was campaigning for debt relief and increased aid in the run-up to the Gleneagles summit, it was the decision of European development ministers to agree commitments on both that helped to move other nations to commit more.

When I led the British delegation to the climate change talks in Bali two years later, I saw what an impact the EU uniting behind a single proposal had and how much stronger that was than all the countries acting separately. These two examples from my direct experience illustrate precisely why Britain's voice is strengthened by being part of the European Union and not weakened.

I have changed my view on Europe since 1975.  I have been on a journey, not least because Britain has been on a journey too. We live in a changing world and if you look at the future challenges we face I believe the case for Europe is stronger now than ever.

He will say that some of the biggest challenges in the future will require an internationalist outlook:

In an increasingly interconnected world the divide between foreign and domestic policy will become ever more blurred and whether it is fighting climate change, reducing poverty, dealing with conflict, water, land, energy or the consequences of migration, they all will require an internationalist outlook.

The story of Britain over the last century is one of a nation at the heart of world affairs. It is the story of a country that has been at its best when we have been outward looking and confident.

In the 20th century we helped build the institutions that have given us the chance to make progress: the UN, EU, NATO.  In the 21st Century we cannot afford to reduce our influence or to isolate ourselves or shut the curtains and close the doors and wish that the rest of the world would go away.