• Jones AM: “Nuclear weapons are indiscriminate, their impact incalculable and their cost insupportable”

The Green Party will mark the seventieth anniversary of the atomic bombing of Hiroshima on Thursday (06 August) with a renewed call to scrap the Trident nuclear defence system.

Events organised by the Campaign for Nuclear Disarmament (CND) and supported by the Green Party will take place across the country with Green activists joining a ceremony in central London to ask why £100 billion will be spent on weapons that should never be used.

Baroness Jenny Jones AM is one of the speakers at the Tavistock Square ceremony and she’ll be using her speech to remind attendees that nuclear weapons are “impossible to use with any guarantee of safety”. 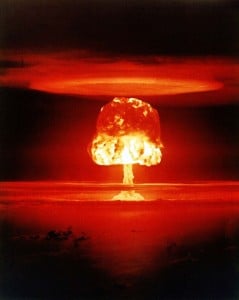 “It is amazing that we haven’t learnt more from the nuclear bombing of Japan, that nuclear weapons are indiscriminate, their impact incalculable and their cost insupportable.

“Britain should accept that such weapons are impossible to use with any guarantee of safety and we should scrap plans for renewing the Trident nuclear defence system, freeing up £100bn to spend on our national wellbeing.”

Jean Lambert, the Green MEP for London who has protested at the Faslane naval base, the home of the UK’s nuclear submarine fleet, says that as well as “commemorating an appalling historical event”, the day should be used to “consider what steps must be taken towards nuclear disarmament”.

“At Hiroshima, instant mass destruction was unleashed and a city was levelled by one plane, dropping one bomb. August 6, 1945 changed the world. While remembering, we must also consider the on-going implications because the threat remains.  Today, nine nations have a stockpile of over 15,000 nuclear warheads – the UK is one of them.

“We are not only commemorating an appalling historical event because proliferation remains and the threat is growing. As well as thinking about that profound day, we should also consider what steps must be taken towards nuclear disarmament. There are a growing number of voices saying that replacing the UK's Trident nuclear weapons system is costly and unnecessary as it does nothing to respond to the security risks we now face.

“The UK can take the lead in nuclear disarmament if it has the courage and vision to do it. To deploy a nuclear weapon, we only need to have one. Has our human race learned nothing?”