HMRC has increased the amount that it collects from the UK’s biggest businesses through investigations and other compliance work related to underpaid corporation tax by 25% in the last year to £4billion, up from £3.2billion* in the previous year, says Pinsent Masons, the international law firm.

According to Pinsent Masons the increased level of activity by HMRC’s Large Business Service in targeting big corporates is part of its overall efforts to block tax avoidance and increase tax yields through more intensive site visits and investigations.

Pinsent Masons says that as a result the relationship between the taxman and corporates has been changing. A good working relationship centred on regular meetings between the HMRC’s Customer Relationship Manager and the Head of Tax of that company is being replaced by visits by larger teams of inspectors. These teams will now want to interview the Chief Financial Officer and even Non-Executive Directors.

“HMRC has turned up the heat on big corporates and in terms of increasing tax take that has worked.”

“HMRC is very conscious of the public perception, however misguided that might be, that big companies get away with underpaying corporation tax and HMRC is keen to disprove that and show that it is doing its job.” 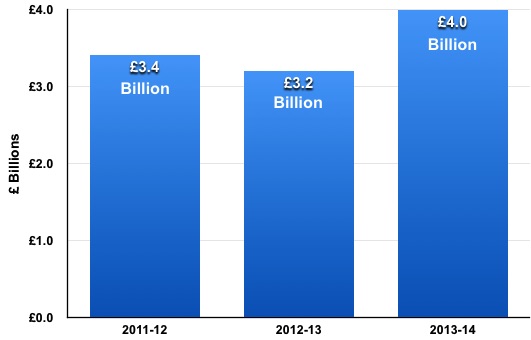 Controversy has raged over whether some UK-based subsidiaries of large US corporations  have underpaid their corporation tax by carefully arranging where their revenues and costs are assigned across their businesses.

Eloise Walker adds: “HMRC have been stung by some of the criticism that they have received about their approach to policing big businesses. They are not a soft touch and the big increase in compliance take reflects that.”

Adds Eloise Walker: “Mid-tier firms should take note and ensure they have their houses in order.”

Corporation tax rates have been reduced each year since 2010, when they stood at 28%, to 21% this year. They will be cut to 20% next year. However, this reduction in the corporation tax rate has not led to any decline in compliance take.

* Figures in graph have been rounded up.

Blink and you miss it again…..