• 68% increase in income from investigations into mid-tier businesses

HMRC took a record £253m of extra tax from mid-tier businesses' transfer pricing arrangements in the last year as the tax authority switched its attention away from investigating the biggest multinationals, says Pinsent Masons, the international law firm.

Pinsent Masons says that this represents an increase of 68% over the £151 million HMRC received from mid-cap businesses' transfer pricing in 2011/12*, and more than ten times the tax authority's yield from that area in 2007/8. This is the first time HMRC has received more transfer pricing yield from its local compliance teams than from the Large Business Service, which deals with the UK's 770 largest businesses.

Pinsent Masons explains that transfer pricing concerns the charges made between different parts of a multinational business for goods, services or intangible assets such as intellectual property. This can impact the profits reported in different markets, and the levels of corporation tax paid. In recent years companies such as Amazon, Starbucks and Google have been accused of arranging their transfer pricing systems to reduce their tax liabilities in jurisdictions such as the UK.

Pinsent Masons says that HMRC's change of focus comes after a concerted effort within the organisation over the last five years to bring its backlog of transfer pricing cases up to date. The transfer pricing arrangements of many of the largest corporates are now regarded as 'low risk' by HMRC.

"These numbers should be a warning to mid-tier businesses that their transfer pricing arrangements are now firmly on HMRC's radar. Any company of significant size with overseas operations should be aware that HMRC is now actively pursuing businesses below the top tier to reel in additional tax.

"While it has taken a number of years, HMRC is now broadly satisfied that the largest businesses are conforming to transfer pricing regulations. Mid-cap businesses are next in line to be investigated, and should make compliance a priority immediately. They should also undertake a health check to make sure they have the formal evidence needed to back up their position. This is one of the greatest areas for challenge we see.

"Businesses should also be aware that tax authorities in many other jurisdictions are now looking much more closely at the transfer pricing arrangements of businesses that operate in their countries. Many developing countries are becoming much more aggressive in pursuing businesses for additional tax, and this shows no signs of slowing down." 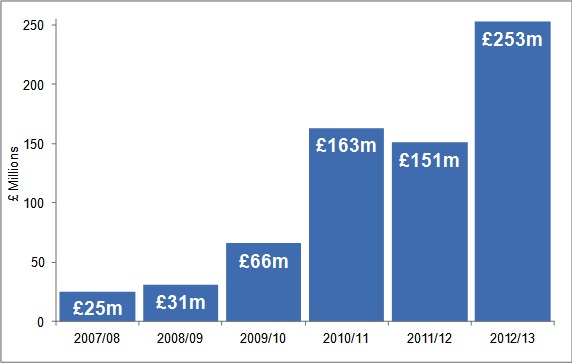 Pinsent Masons adds that HMRC is also creating huge uncertainty for businesses by taking an average of more than two years to agree transfer pricing arrangements.

Pinsent Masons says that HMRC took an average of 26 months to pre-approve businesses' 'transfer pricing' arrangements during the 2012/13 tax year, 54% longer than the 16.9 month average wait a year earlier. This long wait is forcing businesses to put their transfer pricing arrangements into action without HMRC approval, causing commercial uncertainty for businesses.

Businesses with significant overseas operations often choose to apply to HMRC in advance of implementing new transfer pricing arrangements, in order to ensure that the complex transactions involved will not later attract additional tax bills from the tax authority. The problem of long wait times for approval of these arrangements was first identified by an HMRC review in 2006. HMRC now has a target of settling all applications for approval within 18 months.

"Despite having had several years to apply the correct resources to the problem, HMRC is still falling a long way short of the performance level the biggest businesses need it to reach. The timescales it is currently working to don't reflect commercial reality, as was the case when the problem was originally identified almost eight years ago.

"A target of 18 months to resolve a transfer pricing issue is already generous to HMRC, and causes a lot of uncertainty for some of the most important businesses to the British economy. For HMRC to miss even that target by such a distance is disappointing. A more realistic target would be 12 months, with an aim to reduce that even further.

"A lot of big businesses are questioning the management of transfer pricing cases within HMRC. While they are undoubtedly complex and challenging cases to settle, reaching a resolution within a reasonable commercial timeframe should be one of HMRC's prime concerns. HMRC, like all Government departments, is under continuing pressure to reduce costs, but has been given additional resources to deal with avoidance and transfer pricing issues. It needs to deploy those resources effectively."

Back to the Future with Labour says Nigel Farage