HMRC has doubled its use of private sector bailiffs and debt collection agencies over the last two years as it takes more aggressive action to chase overdue tax, says UHY Hacker Young, the national accountancy group.

UHY Hacker Young says there is a concern that private sector debt collection agencies will be far more aggressive in pursuing overdue tax.

“Bailiffs do not have the best of reputations and many taxpayers are going to be very alarmed when a debt collector is brought in.”

“Most taxpayers who are behind with their payments are in that situation because they simply can’t afford to pay their tax – not because they intend to string HMRC along.”

UHY Hacker Young says that the bailiffs may be quicker to move in as HMRC has been winding down its “Time to Pay” scheme, which allows taxpayers to reschedule their tax debts.

Adds Mark Giddens: “There is the danger of mistakes in communication between HMRC and its agencies, with taxpayers being incorrectly chased for debts. Any errors that do arise would be far easier to rectify if the process was kept in-house.”

UHY Hacker Young notes that HMRC has tough targets in place to get tax debt in earlier to help reduce the deficit.

Mark Giddens explains: “The fact that they are spending record amounts on debt collectors shows just how determined to get the money they think is owed to them.”

“HMRC recognise that people are more likely to respond quickly to a debt collector on their doorstep than to any number of threatening letters.”

HMRC’s hard-line approach looks set to continue, especially if the proposed changes to allow access bank accounts to reclaim money come into effect. HMRC would then be able to take money it believes it is owed direct from taxpayer’s savings accounts without their permission.

Mark Giddens warns: “There are real fears that these controversial changes could result in the wrong people being targeted. HMRC’s databases may not be fully up to date and money could be wrongly taken from accounts.” 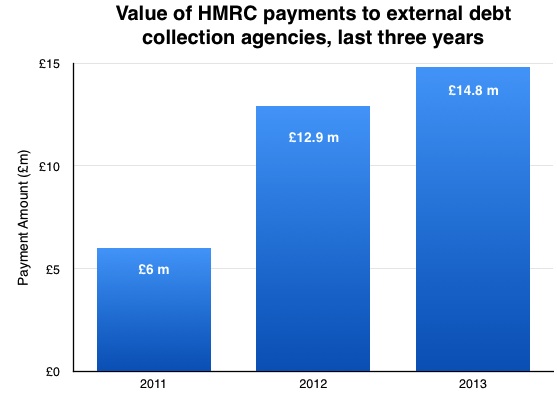 The HMRC has responded to this and their response can be found here.

The US property market – bigger and newer in 2015