Now that people are starting to come back home from their well deserved annual breaks, new research shows that holidaymaker in 2012 had to pay some £2 billion in tax for the pleasure. That works out at £56 for each holiday taken abroad.

That, says The Taxpayers' Alliance (TPA), is £500 million more than four years earlier in 2008. This is down to increases in Air Passenger Duty and VAT.

So last year a family of four would have paid about £350 in tax for their flights and purchases of holiday items in the UK such as sun cream, clothes, a haircut and even subbed sessions. 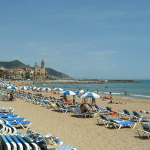 * A family of four travelling to Florida will have faced an average tax bill of £350 on their flights and holiday purchases in the UK, an increase of £150 since 2008

"People work hard all year to make ends meet, despite high taxes and rising prices. They look forward to a holiday as a blessed relief but sadly the tax man is waiting even when they try to take a well-earned break. Britain's exceptionally high taxes on flights in particular make holidays much more expensive, as well as making it harder for Britain to compete as a destination for tourists and business investment. The Government should cut Air Passenger Duty and make flying more affordable."

Traders pause for breath as Euro finds a few buyers

Bank of England paves the way for more QE