Hollande is living on another planet

Sometimes I feel sorry for politicians. I have met a few in my time, and while there are many who are out to grease their own palms, others genuinely do have principles and try to do the best for the people and the ideas they represent. Despite the latest round of scandals hitting parliament, and even the best efforts of European politicians to avoid taking action to sort out the euro crisis, I tend to think that at least some politicians are good people.

And then one of them stands up and says something completely ridiculous.

In this instance, it was French President Francois Hollande. On a trip to the Far East, he stood up and told his Japanese audience that ‘the crisis in Europe is over’.

On one level, this may just represent wishful thinking. After more than three years since the full extent of Greece’s problems started to become clear, most Europeans probably wish that the crisis would just go away. And, since the ECB stepped up to the plate last year, the interest rates that peripheral governments pay on their debt have fallen. Self-interest undoubtedly plays a role too – with Italian and Spanish paper still a bit risky, France stands to benefit if foreign investors can be tempted back to the region.

But to say that the crisis is over is just stupid. Only three months ago, the ECB was close to forcing Cyprus out of the currency union – the central bank was about to break its own currency. Today, hearings have started at Germany’s constitutional court about the validity of the ECB’s ‘Outright Monetary Transactions’ programme, the very mechanism that has bought about some calm in financial markets. And all the while the Spanish and Italian economies continue to shrink, while France is in an even worse state than the UK. 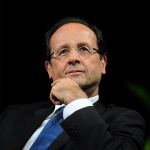 Let’s do a quick fact-check. As of today, the euro area as a whole is in recession. Germany might post positive GDP growth this year, but probably not much. The best that can be hoped for in Spain and Italy is that GDP stops falling at some point next year. Unemployment is still far too high in several euro area countries, with youth unemployment at around 50% in Spain. And while yields have converged, there is still a significant gap between peripheral countries and Germany, and recent volatility suggests that sentiment remains fragile. Sovereign debt dynamics still haven’t stabilised anywhere in the periphery (with the possible exception of Italy), and all hopes for a proper banking union have been watered down to the stage where they are now a pale imitation of what is needed.

So we've lost our ambition have we Mr Osborne?