The rate of house price inflation across UK cities has accelerated in the three months to April as record low mortgage rates support buying power and a scarcity of housing ensures prices keep on rising.

• House prices across the Hometrack UK Cities House Price Index grew by an average of 1.4% over the three months to April – higher than the same period in 2014 (1.2%) and the highest 3 month average rate of growth for a decade – figure 1.

• Despite a recent pick up in housing turnover, the average time between moves in some cities is up to 28 years – twice the average between 2003 and 2007 which was a move every 14 years – table 2.

• A 30% decline in the proportion of moves by existing mortgaged homeowners over the last decade is starving the market of a source of new supply and driving prices upwards.

The UK housing market shrugged off the uncertainty around the General Election and a sizable slowdown in the monthly rate of house price growth over the second half of 2014 to post an average increase of 1.4% over the three months to April. This is higher than the same period in 2014 (1.2%) and the biggest quarterly average rate of growth for a decade according to the Hometrack UK Cities House Price Index.

House price growth across the Hometrack UK Cities House Price Index is running at an average of 9.0% and continues to exceed the overall UK rate of growth of 6.8% year on year. At a city level the annual rate of growth ranges from 3.5% in Liverpool to 11.0% in London. This is the smallest spread in city level house prices since 1996, as the rate of growth in high value markets such as London and Cambridge moderates whilst house prices in regional cities continue to recover off a low base. However, 11 of the 20 cities have house prices that are still below their 2007 peak.

House price increases are being driven by the improving economic outlook boosting market sentiment, record low mortgage rates and a low churn of housing stock which is creating scarcity of supply.

The average number of years between moves is calculated from the number of housing sales in a year relative to the stock of private housing in each city1 .In the 1980s, the average house was changing hands every 10 years and this increased to an average of 14 years between 2003 and 2007. This has now climbed to an average of 21 years cross all cities and is as high as 28 years in some cities such as Liverpool (table 2).

"Home buyers and investors shrugged off the run up to the General Election and continued to bid up the cost of housing with average house prices across the 20 cities index up by an average of 1.4% in the 3 months to April. Record low mortgage rates, which are more than half the level of 2007, are boosting buying power, while low rates of housing turnover creates housing scarcity and is keeping an upward pressure on house prices.

"One factor driving housing scarcity has been a marked decline in the proportion of housing sales by existing mortgaged homeowners – down to just 35% of all sales in 2014 – almost half the level seen in 2007. This group owns half of all owner occupied housing but fewer moves by existing mortgaged homeowners is starving the market of a source of new supply.

"Higher moving costs, and an inability or unwillingness to finance a home purchase are all factors driving fewer moves by existing homeowners. The shift to a low inflation environment also has an important longer term impact as it erodes mortgage debt more slowly than when inflation is higher. Households cannot rely on inflation to shrink their debt in real terms as much as they did in say the 1980s meaning longer periods between moves is a trend that is here to stay. Growing illiquidity of housing is a major challenge for the new Government and is set to make house prices more volatile than in the past" 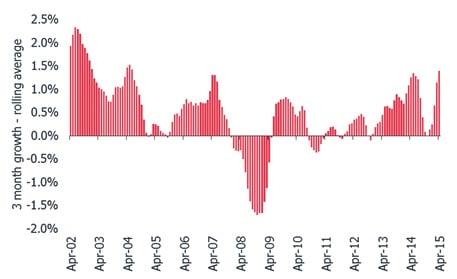 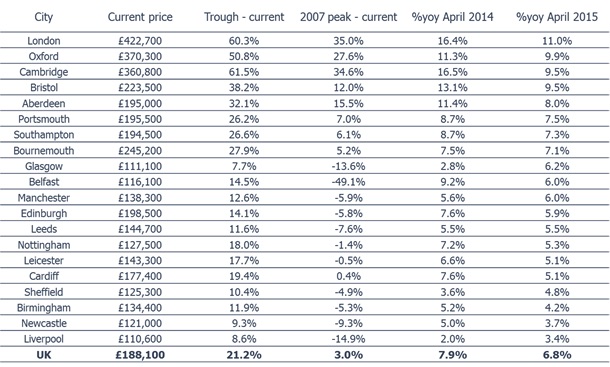 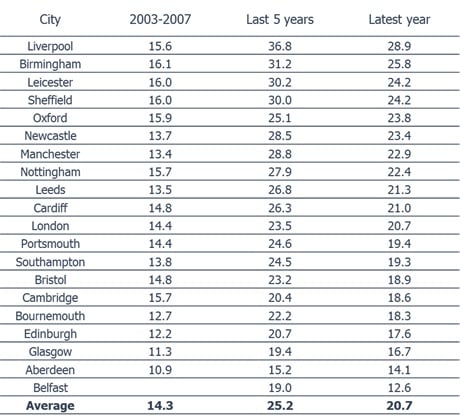 NOTE – The definition of London 'City' is larger than the London Government Region. The 'City definition extends further out into London's travel to work area capturing the commuter areas outside the 33 London Boroughs. The London 'City' area covers 44 local authorities and better represents the housing markets that are influenced by the London economy.