But do bear in mind that all the figures from 2010 Q3 onwards are provisional at present.

There are different classes of ‘homelessness’. The figures here relate to those that are ‘acceptances’ and are owed a main homelessness duty. For example, in 2011 Q4 local housing authorities made 27,470 decisions on homelessness, 47% of which (the 12,830 mentioned above) were ‘accepted’. Of the rest 29% were found not to be homeless, 17% were homeless but not in priority need and 8% were intentionally homeless but in priority need. (Note-figures are rounded so do not equal 100%.)

But before we all descend into a pit of despair over the state of the economy putting loads more people out on the heartless streets let us cast our eyes over the homelessness figures since 1998 (source – communities.gov.uk).

In that year as the labour Party were bedding themselves into the task of government after nearly two decades in the wilderness, the data showed the number as over 100,000 and it got worse over the following years until it hit a high in 2003 of 135,590 as can be seen in the graph below. And, as you can see from the graph, this then declined sharply until 2009/2010 when the annual figure was 40,000. (Click graphs to enlarge.) 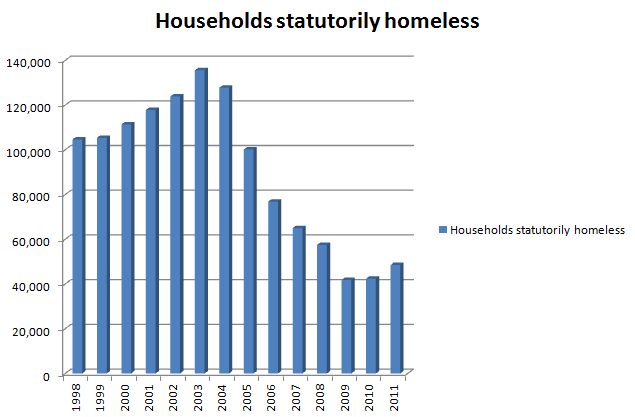 When viewed by quarter in the next graph you can see that after hitting a low in 2009 Q2 homelessness has been on the rise again. 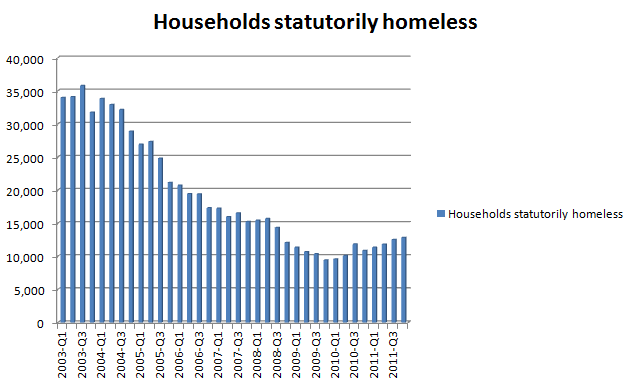 But, although homelessness is not something to be ignored or dismissed (individually it causes untold misery and tears families apart), based on the figures given it is still much less of a widespread problem than it was nine years ago. This maybe due to government pressure on banks to go easy on clients in financial trouble, or maybe due to banks being unwilling to repossess an asset falling in value unless they really have to.

If you have a homelessness issue please visit the experts at SHELTER.