• Towns and cities within commuting distance of London – including­ Croydon, Brighton, Tonbridge, Cambridge and Oxford – are all lodger hotspots

The lodger market is booming with ‘lodger wanted’ ads up 41% in just two years, according to new data from the UK’s biggest flat and house site SpareRoom.co.uk. The trend for homeowners letting spare rooms is now growing by almost a quarter (23%) year on year, with 88,905 new lodger wanted ads posted in 20141, as people look for new ways to boost their incomes.

Comparing the number of new lodger wanted ads placed in Jan-Feb 2015, with the same period in 2013, Aberdeen has seen the biggest rise in lodgers over the past two years – a staggering 140% increase in homeowners letting rooms – followed by Blackpool (up 38%) and Liverpool (up 36%)2. 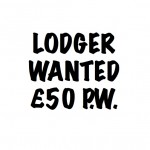 Several satellite towns have also emerged as lodger hotspots – including Croydon, Brighton, Tonbridge, Cambridge and Oxford – as homeowners realise renters working in London are struggling to afford the capital’s high rents so choose to save money by living further out of the city2.

A survey by SpareRoom also revealed that almost half (45%) of ‘live in landlords’ couldn’t afford to pay their mortgage without a lodger. Lodger earnings are as much as £690 per month in London, that’s £8,280 per year, with the average lodger income for the UK £492 per month or £5,904 per year.

Under the Government’s Rent A Room scheme, homeowners and renters letting rooms to lodgers can earn up to £4,250 per year tax free, and must declare additional earnings to the Inland Revenue. However, only a fifth (21%) of UK towns now have average rents within the tax threshold, suggesting the threshold, which has not changed since 1997, is now well out of date. There isn’t a single area in London with average rents under the threshold.

The table below shows the 30 biggest UK post towns with the highest growth in homeowners becoming live-in landlords: 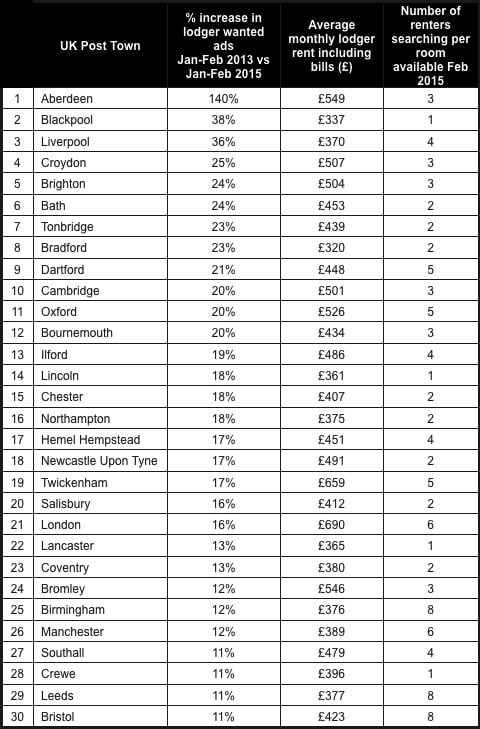 “We’re in the middle of a massive housing crisis in the UK. House prices and rents are becoming unaffordable and, in the rental market, there’s a chronic shortage of decent, affordable stock. In some parts of London there can be as many as 10 flathunters searching for every room available.

“We need to build 250,000 new homes every year – that’s simply not going to happen any time soon. We haven’t built in those numbers since the 1970s, so we must do far more to use existing stock better. The English Housing Survey suggests half of all owner-occupiers were under-occupying their homes in 2013-14 so the capacity is there. The lodger trend is already going a long way to helping, providing hundreds of thousands of affordable rooms across the UK, but we need to do more.

“The current £4,250 threshold discourages people from letting rooms because they’re nervous about having to fill out tax returns. Increasing the Government’s Rent A Room Scheme limit to reflect the market today, rather than 18 years ago, will act as an incentive to many cash-strapped homeowners.”

SpareRoom has launched Raise The Roof, a campaign supported by Shelter and the National Landlords Association, calling on the Government to raise the Rent A Room Scheme tax-free threshold to £7,500 per year immediately, and increase it year-on-year in line with inflation.

Avoid a Scrooge-like Christmas in retirement