Hometrack’s August National Housing Survey has revealed that house prices have risen by just 0.1% for the second month in a row as the gap between supply and demand narrows rapidly.

Whilst average house prices are yet to fall – weaker demand and increasing supply over the last six months have reduced the upward pressure on house prices. This is increasing the amount of time properties are spending on the market and resulting in sellers having to accept larger discounts to the asking price to achieve a sale. All evidence indicates a shift towards a seller’s market in the remainder of the year.

House price growth across the London market continues to under-perform the rest of England and Wales.  Growth flat-lined once again in August and just 11% of postcodes registered month on month price increase. This compares to prices rising across 19% of markets outside London with the impetus for growth coming from commuter towns across the greater South East.

The change of fortunes for the London market over the last six months has been stark.  In February this year 87% of London postcode districts witnessed a price increase over the month compared to just 11% now. The proportion of the asking price achieved has fallen from 98.8% to 96.4%. 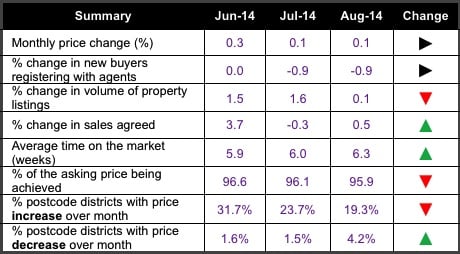 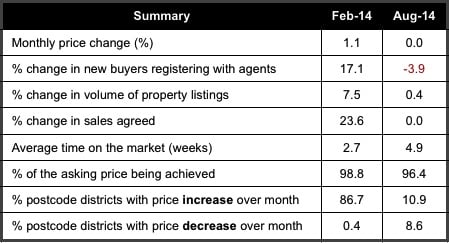 ♦ Demand remains subdued with new buyer numbers down by 0.9% for a second month, largely on seasonal factors,

♦ The proportion of the asking price achieved is down for the third month in a row from 96.8% in May to 95.9% in August. Price falls tend to be recorded when this measure falls below 94%.

"The latest survey continues to point to clear evidence of slowdown, particularly in the London market. This is not a huge surprise for August but the signs of a slowdown in market activity were starting to emerge back in May with evidence of growing resistance to rapid price rises in the London market. Talk of a housing bubble and warning from the Bank of England have impacted sentiment while tougher affordability checks for mortgages and rumblings around interest rate rises is starting to make buyers think twice.

"Important lead indicators in this survey are turning and pointing to a loss of momentum in house price growth. In particular a widening gap between asking and achieved prices in the face of weaker demand and an increase in the time on the market. Both indicators are coming off a positive base which suggest a slowdown in the rate of growth rather than price falls. We expect a continued shift towards a seller’s market in the face of weaker, more price sensitive demand."