The rate of house price growth has halved in the last quarter with average prices rising by 0.3% in June, says Hometrack, the residential property analyst. Hometrack’s June Housing Survey shows a slowdown in house prices as demand weakens and buyers become more cautious over the outlook for the housing market. 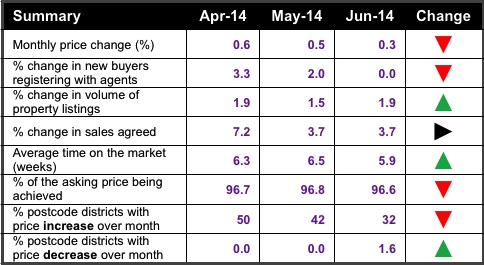 • House prices increased 0.3% in June –  the lowest level since January 2014 (0.3%), which represents a halving in the  rate of growth in the last quarter

• There was no growth in new housing demand in June which marks a major turnaround from the trend over last 18 months.

• London has seen the lowest coverage of price rises for 16 months – half the level of the second half of 2013, with the average time on the market also rising as sales take longer to achieve in the face of weaker demand

Commenting on the reasons for this slowdown in house price growth, Richard Donnell Director of Research at Hometrack said:

“Two months ago the survey pointed to signs of growing price resistance to higher prices amongst buyers against a backdrop of widespread talk of a possible housing bubble.  Pent-up demand has been feeding into the market over the last 18 months creating the upward pressure on house prices. This trend now appears to be running out of steam with no change in demand for housing over the month.

The tight supply of housing means that changes in demand can feed quickly into prices. As demand starts to cool so the rate of monthly house price growth has halved over the last three months. The proportion of the asking price being achieved has been steadily rising for the last 18 months but has now peaked as agents find it harder to sustain price rises.

We expect the rate of house price growth to slow further in the coming months driven by a combination of factors. The primary factor is changing buyer sentiment in the face of an intense debate about a possible housing bubble and widespread calls for Government intervention in the market to cool price increases. Talk of interest rate rises in the near future has compounded the impact on sentiment and buyers expectations over the market outlook. The net result is that buyers are becoming more cautious, all this at a time when tougher affordability checks have been implemented as part of the Mortgage Market Review (MMR).

Alongside these factors impacting sentiment, there was always an overriding question as to the underlying strength of demand and volume of buyers willing and able to enter the market.  Over the past year and a half, pent-up demand has fed back into the market after several years of low activity. The proportion of households willing to enter the market appears to have plateaued for now until the outlook becomes clearer.”

A crash is coming, but not yet