A new PETA exposé of farms that supply crocodile and alligator skins to Hermès-owned tanneries reveals terrible conditions as well as alleged violations of US state and federal laws at an alligator farm in Texas.

Reptiles are trapped in barren and severely crowded pits and, on the Texas farm, had their necks sawed open, some moving minutes after they were attacked with a knife or box cutter in a crude effort to slaughter them – all for £25,000-plus Birkin bags or £1,000 watchbands. The documentation (see video below), has prompted PETA and its affiliates to call on Hermès to stop manufacturing and selling exotic-skin products, which come at a huge cost to wildlife.

PETA US has filed a complaint with Texas authorities over the apparently illegal acts of cruelty to animals that were caught on video by a PETA US  investigator at Lone Star Alligator Farms in Winnie, Texas, where workers shot alligators in the head, some multiple times, with a captive-bolt gun and sawed into the back of their necks with a box cutter to sever their blood vessels. Some animals survived and were seen moving in ice-water bins minutes afterwards. When the captive-bolt gun was believed to be malfunctioning, the facility manager told a worker to cut into hundreds of conscious alligators and try to dislocate their vertebrae and then shove a metal rod up their spinal columns in an attempt to scramble their brains. The manager referred to the live alligators as "watchbands", as some of their skins are used for the "luxury" bands on Hermès wristwatches. 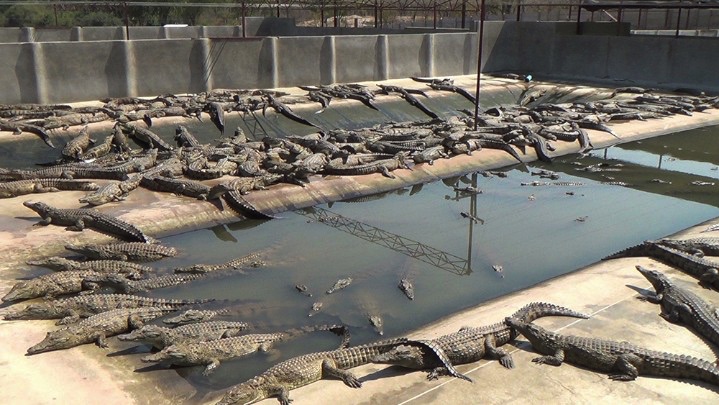 Crocodiles are confined to concrete pens until they are slaughtered at around 3 years of age. These crocodiles are around 1.5 years old. (PETA, 2014)

Video footage captured by PETA US investigators at Padenga Holdings crocodile farms in Kariba, Zimbabwe – which supply skins for Birkin bags – shows concrete pits that are each filled with as many as 220 crocodiles. Padenga operates one of the largest Nile crocodile–farming operations in the world, accounting for nearly 85 per cent of the global supply of Nile crocodile–skins to luxury fashion brands, with 43,000 animals killed in 2014 alone. Padenga's director of operations describes the "luxury" bags market as "bulletproof". The company also own 50 per cent of the Texas business.

"PETA's exposé of Hermès' suppliers in the US and Africa reveals that every Hermès watchband or Birkin bag means a living, feeling being experienced a miserable life and a ghastly death", says PETA Director Mimi Bekhechi. "People pay thousands of pounds for such accessories, but the reptiles on these cruel and disgusting factory farms are paying the real price."