The highly talented and always in demand Toby Jones has increasingly lent his acting skills to an expanding and varied collection of genres and parts, the thespian has recently been seen in supporting roles ranging from the pure bubblegum comic strip of the Joe Johnston blockbuster, Captain America (2011), to the more sombre and grown up affair of the stylised and intelligently rendered Tomas Alfredson thriller, Tinker, Tailor, Soldier, Spy (2011).

Prior to gracing the screen in the highly anticipated portrayal of perhaps the most famous movie director of them all, Alfred Hitchcock, the actor has turned his attention to the horror genre and teamed with British screenwriter and director Peter Strickland for the wonderfully titled and retro envisioned Berberian Sound Studio.

The highbrow horror flick finds Jones in the role of a sound engineer named Gilderoy, a man hired to orchestrate the sound mix for the latest feature by a fictional Italian horror maestro named Santini, portrayed by Antonio Mancino.

Finding himself at the mercy and criticism of the ever demanding director, at odds with a language barrier and foreign culture, unnerved by the subject matter of the movie in production and ultimately locked away with only a collection of screams and surreal sounds for company, the mild-mannered Gilderoy is about to descend into a personal hell tinged with paranoia.

Focusing on sound rather than imagery, the trailer hints that this latest feature from Strickland should allow for a more imaginary albeit unsettling experience for the viewer with the internal tension within Gilderoy building gradually throughout the film.

The use of a sonic soundscape should also provide a welcome alternative in a season dominated by big visuals whilst the reliance on sound has previously been used in more highbrow and psychological chillers from yesteryear such as the Robert Wise classic, The Haunting (1963).

Elsewhere, the retro inspired environment with its late night setting, darkened corridors, retro film projectors and tape spools, not to mention the glimpse of a possible screen siren, lead us to believe that Berberian Sound Studio may also pay homage to the Italian horror scene of the Seventies as much as providing a showcase for Jones to immerse himself within the increasingly spooked soundman.

Strickland has previously graced the screen with his short feature Bugglegum whilst subsequently attracting interest with his 2009 feature Katalin Varga, there definitely seems be an interesting and creative mind at work behind his features and judging by the initial footage on show here, the latest offering from the film maker is definitely worth the price of admission.

In a summer where the sun has rarely graced these shores, the dark of the matinee and the Berberian Sound Studio may offer a welcome and alternative way to spend the last weekend of the summer. 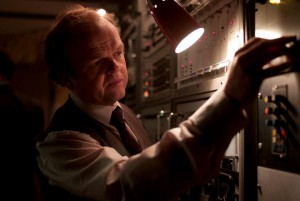