The UK property market has ignored the normally quiet holiday season and seen a massive addition of £2,550 to the asking price of the average home says Rightmove.

This rise of 0.9 percent is the largest seen in the month of September since 2002. On an annual basis asking prices have risen 6.4 percent.

Breaking this rise down it is the property rich who are benefitting from this as "Second-stepper and top-of-the-ladder properties, covering all property types with three or more bedrooms, went up by an average of 1.2%". As opposed to the first time buyer type of properties that have two or fewer bedrooms, where asking prices fell on average by 1.1 percent. (Click on the chart below to enlarge it.) 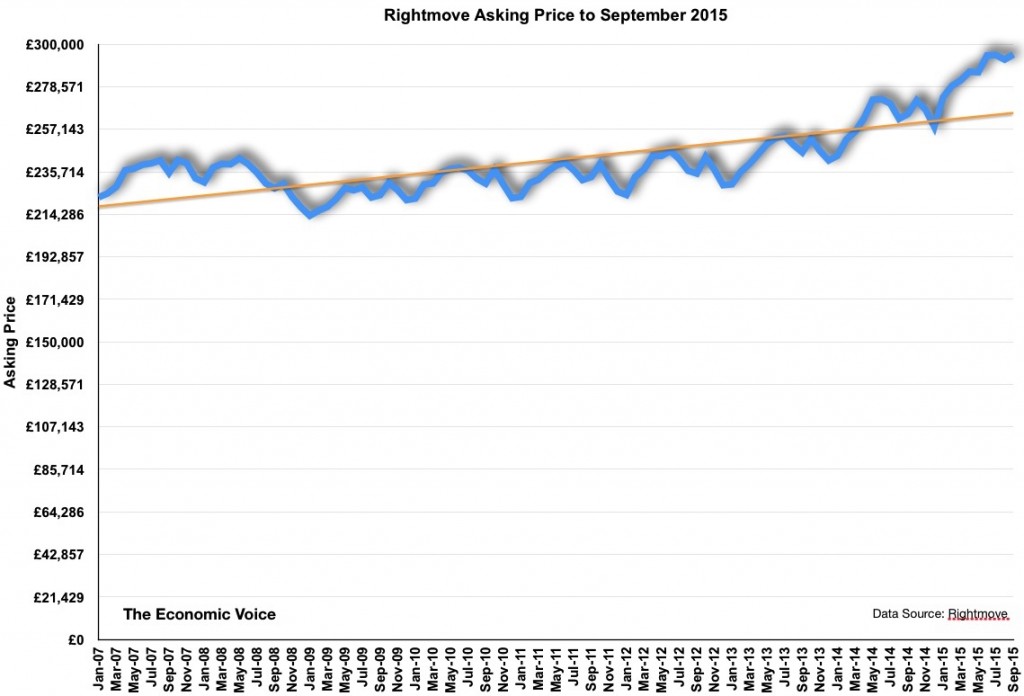 "Prices are at an all-time high, yet borrowing is historically cheap and positive sentiment is aided by the ongoing postponement of rate rises from these six-year lows. Demand from those who can afford to buy remains high, and suitable supply remains tight, with the number of properties coming to market down 6% on the same period in 2014."

On the first time buyer market he said:

"This year’s price surge in the first-time-buyer sector has stalled this month, and has now been overtaken by second-stepper homes both in terms of monthly and annual increases. It looks like some of those buying typical first-time-buyer properties are now struggling to afford prices in this bracket that have on average gone up by nearly £10,000 in the last year, hence new sellers are asking for less."

Will we be looking at the average asking price topping £300,000 before the year is out? With the market yet to get into full swing after the summer, few houses being built and growing demand from an increasing population I wouldn't bet against it.

Broadening horizons: why the UK economy can benefit from valuing the vocationally trained