Some members of the House of Lords have called for an inquiry into what the real cost of the UK’s membership of the European Union is.

The former leader of the United Kingdom Independence Party (UKIP), Lord Pearson of Rannoch, said in the Lords yesterday that it was about time that a cost benefit analysis was conducted with regard to our EU membership.

“For more than 30 years the political class has done its best not to talk about our membership of the EU. But the wheel of history turns. And the question as to whether we should leave the EU is now firmly back on the national agenda. But this Bill does not deal with that question. It is an altogether milder and more innocent creature. It merely requires the Chancellor to set up an impartial inquiry into the economic costs and benefits arising from our membership of the EU.”

He also said that some ‘fundamental misconceptions’ need to be addressed such as that British jobs and trade depends on our continued membership of the EU.

This would be an interesting exercise as, whenever anyone talks about our exports to the EU (which is the emotive bit for related business and their employees); we are told that ‘half our business is with the EU’. That sort of statement is misleading and always goes unchallenged.

That means that, if half our exports went to the EU, then that would be about Â£214.3 billion, or say about 15%. A very significant figure yes, but not the ‘half’ we are led to believe.

We also have a balance of trade deficit with the EU so they need us more than we need them. Consider, would they want to stop exporting goods like BMWs and Fiats into the UK? One also wonders if virtually identical goods are not just being effectively swapped. Would it for example really hurt everyone in Europe to eat a bit more home-grown local food instead of it being sent hundreds of miles? 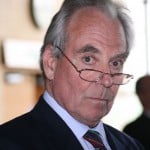 Lord Pearson was backed in his call by Lord Steven of Ludgate, who said that the benefits of membership were getting ‘harder to see’, as well as Baroness Noakes who called it ‘immaculate timing’ whilst there was ‘turmoil in the Eurozone’.

But there is also another cost that cannot be so easily quantified, and that is the democratic cost.

As a nation we should also ask, even if we gained financially, would it still be worth taking the money if it meant handing over sovereignty of the nation to the EU.

If you are in doubt over the answer just look around the EU, especially the Eurozone and look at the discontent of nations being forced to bow to a higher control now that the money has run out and the bill has arrived.

The increasing cost of raising a child