Oxford leads the Index of 20 cities in annual house price growth with an increase that is nearly 10 times greater than that exhibited by Liverpool at the bottom of the table. Hometrack attributes gains in southern cities to robust demand for housing underpinned by strong local economies.

− However, all cities showed notable monetary gains over the last 12 months ranging from £4,200 in Liverpool to £41,700 in Oxford

− Bristol continues to exhibit the fastest month-on-month acceleration in prices with a 1.3% gain in May

UK house prices have increased by an average of £11,500 over the last 12 months to May 2015 with seven cities in the South of England significantly outperforming this benchmark, residential analyst Hometrack has revealed in its latest UK Cities House Price Index. The average UK house now costs £189,400 with London more than double this figure at £425,700.

All 20 cities recorded gains in the last 12 months, but three Northern cities fared the worst adding less than half the UK average to house prices. Liverpool (£4,200), Newcastle (£4,700) and Sheffield (£5,300) are still 14%, 8.5% and 3.8% below their 2007 peak and are part of a group of nine cities in the North of England, Scotland and North Ireland that are recovering at a much slower pace due to weaker demand from house buyers.

All cities except one – Aberdeen which saw -0.4% loss – exhibited month-on-month gains in May, which can be attributed in part to a post-election bounce. Bristol led the way with a 1.3% increase followed closely by a mixed bag of cities Cambridge, Leicester, Liverpool and Belfast with 1.2%.

"House prices have picked up momentum post-election.  An increasing proportion of households are feeling the benefits of the improving economy, which means that house price growth is set to continue in the coming months. The greatest risk is an earlier than expected increase in interest rates which would knock market sentiment.

"The strong demand-side recovery seen in southern England has yet to spread to other cities revealing the diverse nature of the housing market. All cities are making gains at different rates of growth, but the cities with the biggest increases all have something in common – strong local economies.

"Affordability pressures will bite at some point in the high value, high growth markets. The double digit price growth registered in cities such as London, Oxford and Cambridge is being sustained by a lack of supply and below average transaction volumes with a third of sales funded by cash or buy to let mortgages. London has the highest price to earnings ratio, but it covers a wide range of sub-markets. Over the last 3 years, the impetus for house price growth has shifted from prime markets to the more affordable markets in outer London and the commuter belt." 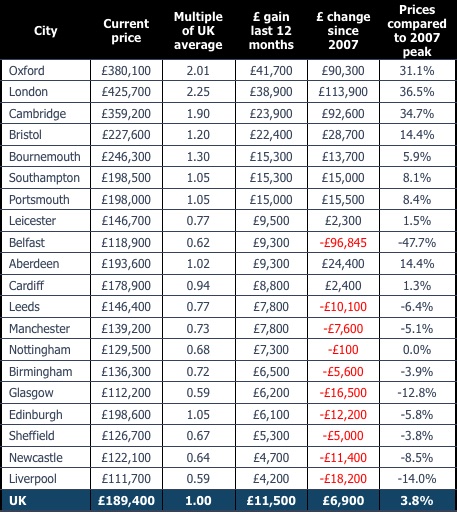 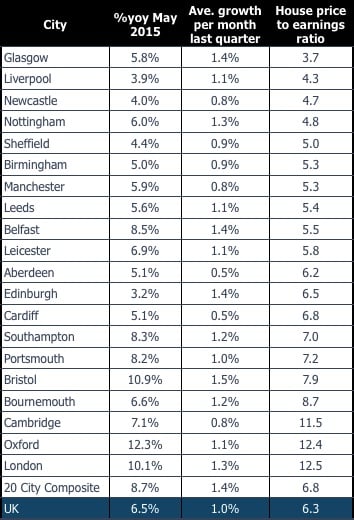 The Hometrack UK Cities House Price Index is Not Seasonally Adjusted
NOTE – The definition of London 'City' is larger than the London Government Region. The 'City definition extends further out into London's travel to work area capturing the commuter areas outside the 33 London Boroughs. The London 'City' area covers 44 local authorities and better represents the housing markets that are influenced by the London economy.