The Nationwide Building Society reports that house prices increased by 0.3 percent in January 2016 on a seasonally adjusted basis. This is a small drop from December 2015’s 0.8 percent increase. On an annual basis house prices have risen by 4.4 percent compared to the 4.5 percent seen in the year to December 2015.

Looking at overall trends since the beginning of 2007, you can see from the house price graph below that, although the trend is still upward, there may be indications of a slowdown. However, one must not forget that the housing market does tend to be quieter over the Christmas period. 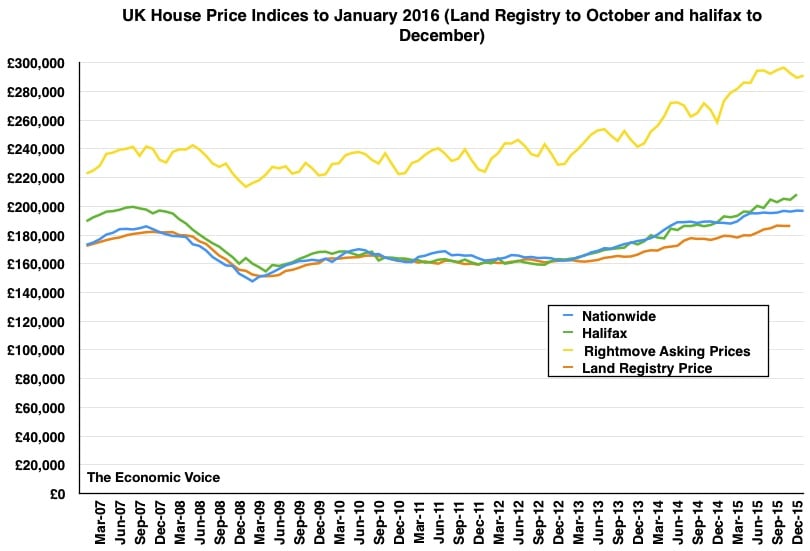 “The pace of UK house price growth remained broadly stable during January. Indeed, annual house price growth has remained in a fairly narrow range between 3% and 5% since the summer of 2015. This trend was maintained in January, with house prices up 4.4% over the year, broadly in line with the 4.5% increase recorded in December.

“As we look ahead, the risks are skewed towards a modest acceleration in house price growth, at least at the national level. The labour market appears to have significant forward momentum. Employment has continued to rise at a robust rate in recent months and, while the pace of earnings growth has slowed somewhat, in inflation-adjusted terms regular wages continue to rise at a healthy pace.”

He went on to say that a combination of continued low interest rates, lagging construction and an overall shortage of housing stock coupled with higher demand will continue to cause upward pressure on property prices.

Frazer Fearnhead, founder and CEO of The House Crowd, commented:

“House price trends in 2016 are picking up where 2015’s left off, with Nationwide’s January House Price Index demonstrating yet another steady rise in house prices.

“This should be encouraging for the UK’s property investors, however recent changes to the way buy-to-let income is to be taxed and an imminent rise in Stamp Duty have sullied traditional buy-to-let for many.

“As the system tips ever more in favour of large funds and the wealthy in general, smaller investors are looking for new ways to secure their futures. Property crowdfunding is providing an accessible way into the property market, allowing people to spread their investments across properties and avoid the pressures of being a landlord. We can certainly expect to see the property investment landscape diversify in 2016.”