UK house price growth continues to soften with an increase in the year to March 2017 of 4.1 percent compared to the 5.6 percent seen in the year to February 2017. 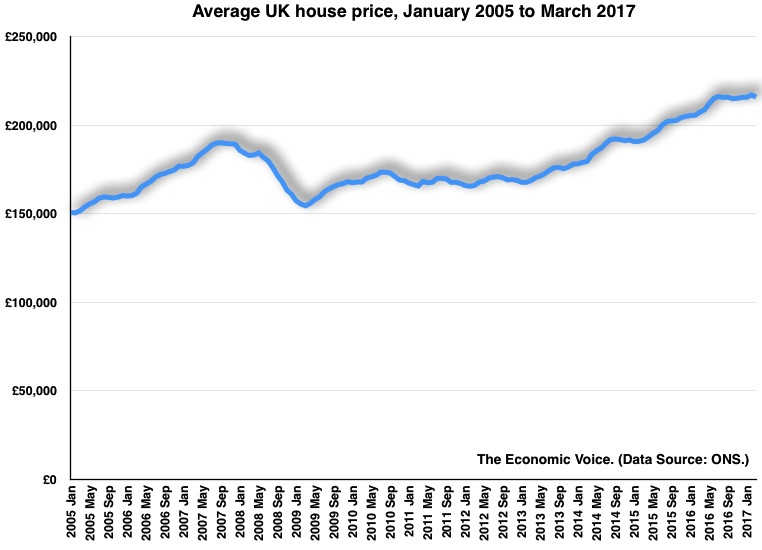 “In the final set of numbers before the General Election, the official ONS and Land Registry house price data showed that average UK house price inflation fell to 4.1% in the year to March, down from 5.6% in February. This is the weakest growth rate since October 2013 and was driven by a slight monthly decline in the average sales price from £217,100 in February to £215,800 in March.

“In a reversal of the normal regional pattern, the South of England showed some of the softest growth with price inflation of 2.8% in the South West, 3.8% in the South East and just 1.5% in London. This is the weakest figure for London since March 2012.

“These figures are consistent with the Brexit related slowdown that we anticipated last year and our guidance of 2%-5% growth this year.”

“The ONS House Price Index for March shows that the general slowdown in the annual house price growth is rumbling into 2017. From a healthy annual pace of 5.6% in the year to February, it has slowed to a more moderate year-on-year increase of 4.1% in March. The let-up in pace will be welcome news to the UK’s housing ladder hopefuls as annual growth rates above 5% have been taking house prices further out of reach.

“The upcoming general election is likely leading to a sluggish first half for the housing market, but if the pattern follows the 2015 election, the market will bounce back sharply as the UK shakes off its general election jitters. Our recent research found that 57% of aspiring first-time buyers remain ‘hopeful and confident’ about their chances of getting on the property ladder, and current market conditions form a good springboard for a positive year for the sector.”

“While it may look as though house price growth is beginning to slow down, affordability remains a key concern for many aspiring homeowners struggling to get a foot on the ladder. Furthermore, rising inflation and recent warnings from the Bank of England that a year of falling wages lies ahead means we’re unlikely to see any immediate relief.

“Now more than ever, the private rented sector will be relied upon to support those unwilling or unable to buy a house outright. As the General Election draws closer, we hope to see some ironclad commitments on house building from policy makers. Encouraging institutional investment in large scale developments, specifically designed to rent rather than buy, will help to control house price growth while also improving living standards for those relying on a well-served buy-to-let market.”

CHART OF THE WEEK: Recent US Monetary History