Although slowing, as is expected around this time of year, house prices are still rising much faster than inflation.

The Halifax reported yesterday that, despite prices having fallen by 0.2 percent in November, house price growth had been 1.4 percent over the three months to November as well as nine percent over the previous 12 months. The price of an average house in November was £204,552 according to the Halifax. 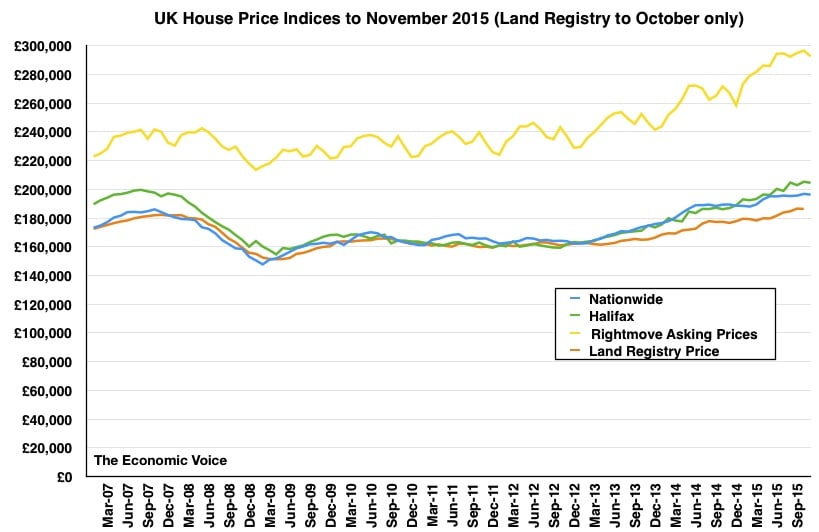 "House prices in the three months to November were 1.4% higher than in the previous three months. This was the smallest rise on this measure since December 2014. The annual rate eased from 9.7% in October to 9.0%.

“The increasingly acute imbalance between supply and demand is causing prices to rise at a robust pace. A situation that is unlikely to reverse significantly in the short-term.”

“UK house prices edged up by 0.1% in November, though the annual pace of price growth slowed a little, to 3.7% from 3.9% the previous month.

“The annual rate of house price growth has fluctuated in a fairly narrow range between 3% and 4% over the past six months, which is broadly consistent with earnings growth over the longer term.

“While this bodes well for a sustainable increase in housing market activity in the period ahead, much will depend on whether building activity can keep pace with increasing demand."

“New-to-the-market sellers have dropped their asking prices at this time of year for the last eight years, with an average drop of 1.9% over the last five years. Those looking to market their property as Christmas gets closer often have a greater sense of urgency to find a buyer and sensibly recognise that trimming their asking price will provide an incentive to potential buyers more focussed on seasonal Christmas trimmings. Buoyant market conditions and a confident outlook for 2016 mean that the reduction, while no-doubt welcome to hard-pressed buyers, is the most Scrooge-like since 2011! It’s likely to be a short-lived respite as the combination of high confidence and low interest rates is a recipe for higher prices next year.”

“Following the pattern we’ve seen throughout this year, house prices continue to rise. The fact that in the three months to November, house prices were 1.4% higher than in the previous three months, proves that bricks and mortar remains a solid investment option.

“However, in the wake of the Autumn Statement, prospective property investors may be discouraged from taking on buy-to-let properties. The newly announced rise in Stamp Duty combined with plans to change how landlords’ income is taxed will make it tough for ordinary people to invest in traditional buy-to-let.