Despite talk of a slowing in the housing market, average house prices in the Uk have increased more in one month than the whole annual CPI increase.

In London average house prices saw another huge uplift of 19.1 percent, in the South East it was 12.2 percent and in the East 10.6 percent.
Looking at the UK as a whole but removing the influence of London then house prices rose by 7.9 percent.
The pinch was also felt heavily by first time buyers as they paid on average 13.5 percent more in July 2014 than in July last year, whereas those moving on from one owned house to another paid 10.9 percent more. 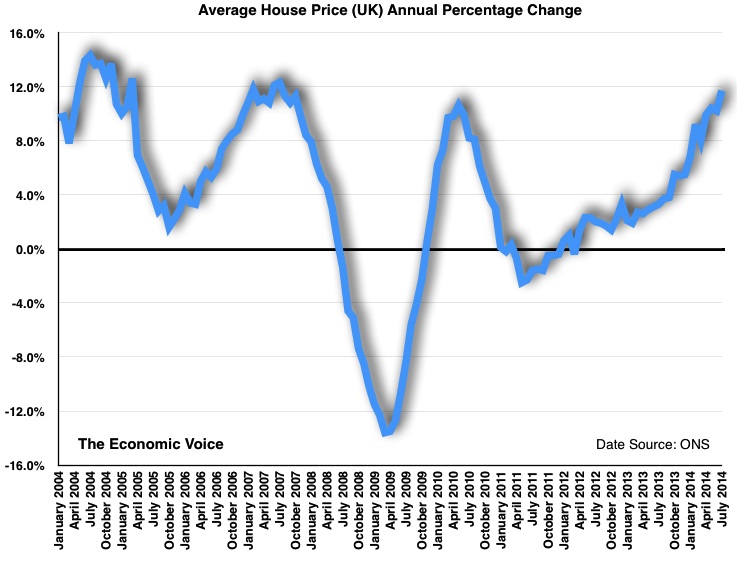 "Latest house price figures from the ONS show that despite signs of a slowing in the market –average house prices were up by only 1.6% from June to July – the pressure on first-time buyers is not diminishing. In July, first-time buyers paid an average £374,000 in London, and £201,000 in the UK – up 13.5% on last year*.

"With evidence that first-time buyers are paying more and more for property, an interest rate rise now anticipated for Spring next year will bring affordability into the spotlight again and, for many, will add greater pressure to household finances. It is therefore unsurprising that recent findings from Shelter show parents are risking their own financial futures to reduce the burden and help their children on to the property ladder.

"Failure to address the critical housing shortage only adds to this and needs to be countered if first-time buyers want to stand a realistic chance of stepping onto the property ladder. Although Help to Buy has encouraged more building and is a step in the right direction, it does not go far enough to reduce the impact limited supply is having on driving up prices."

Step away from the Lego! Four reasons why 'team building' can damage teams