The latest survey of its members by the Royal Institution of Chartered Surveyors puts house prices as edging down across the UK, except in London of course.

The rate of falls though says RICS are reducing.

But demand is up as 9% more of those members surveyed reported increases rather than decreases in demand during March, the highest reading in nearly two years. It does put this down to some buyers hoping to beat the end of the stamp duty holiday though.

A net balance of +2% of survey respondents said that there was an increase in properties coming on to the market in March, which is a drop from February’s +7%.

As to the future a net balance of +20% thought that transaction levels would increase in the coming three months.

Demand saw a slight boost in March as many first-time buyers looked to beat the stamp duty holiday deadline. There has been a gentle increase in activity across the market in the early part of the year but it remains to be seen whether this can continue, given the changes in the Budget and ongoing problems affecting the economy.

London continues to outperform the rest of the UK in terms of prices but, interestingly, the North West did see an increase in activity in March.

One point that RICS says is significant is that many surveyors said that those wanting to sell their homes had to price them realistically if they wanted to be successful.

This is something we’ve always pointed out and the graph below shows how the difference asking prices and prices achieved has been increasing over the last few years.

We call this the Optimism Index’ as it shows how optimistic sellers and their agents are when putting houses up for sale.

The graph is derived from Rightmove asking prices being divided by the average of the Halifax and Nationwide average house prices over the years.

As you can see the prices asked have gone from being 1.25 times (25% more) than the price achieved back in early 2007 to about 1.45 times (45% more) today. Now that’s what I call optimistic. Bear this in mind when making that offer. 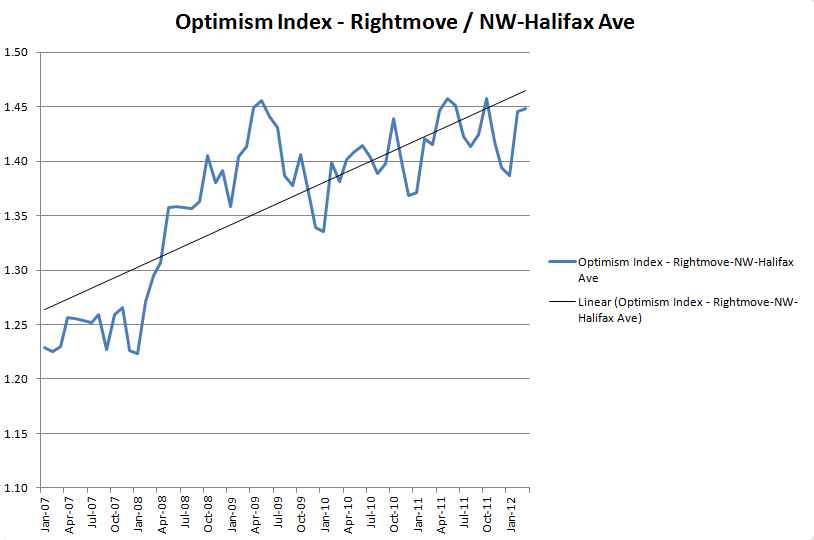