The latest Nationwide House Pice Index (HPI) has the price of the average house falling by 1% during March and, when considered on an annual basis, by 0.9%.

However, before everyone falls into a pit of despair let’s look at the actual average prices themselves. Why? Because the monthly percent fall was derived using ‘seasonally adjusted figures’ and the annual fall was not.

The actual average price rose from Â£162,712 in February to Â£163,327 in March. What the seasonally adjusted figures mean is that this should have been a higher rise.

This graph (which I keep updating and publishing) of the main house price indexes shows the continued overall sideways movement in the price of the average house. You can see that the Halifax, Nationwide and Land Registry HPIs are all moving just about as one and the fluctuations are relatively small when looked at in the round. 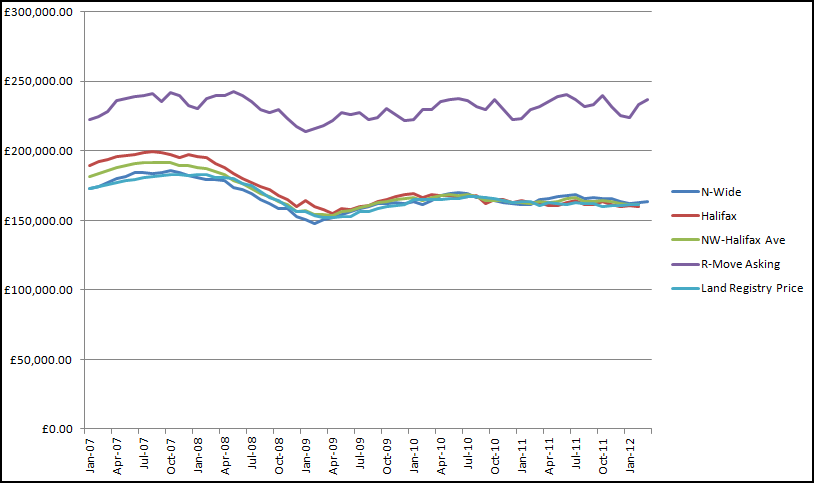 It’s only when you see the expanded view on this next graph that the snake pit of ups and downs in the market becomes apparent. 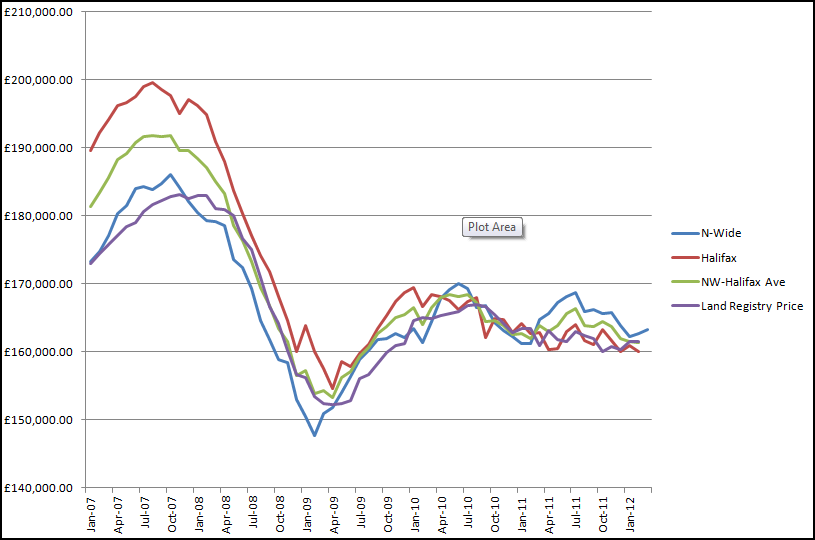 Nationwide said that this move down was not unexpected given the end of the stamp duty holiday and that many buyers had brought their purchases forward into the earlier months so as to ensure they benefited from it.

The price of a typical UK home fell by 1% in March, pushing the year on year rate of house price growth into negative territory for the first time in six months. House prices were 0.9% lower than March 2011.

A slowdown was to be expected, given the imminent expiry of the stamp duty holiday, which had provided a temporary boost to house prices in early 2012 as buyers brought forward purchases that would otherwise have taken place later in the year1.

This dampening effect on housing market activity and prices may fade over the course of the summer, especially if the wider economic outlook begins to improve and other policy measures, such as the Government’s NewBuy scheme are successful in supporting buyer demand.

However, in our view the challenging economic backdrop is likely to continue to act as a drag, with house prices moving sideways or modestly lower over the next twelve months.

House prices as they drift lower will keep reaching new plateaus where new buyers feel the price and time is right for them. There will only be a massive drop is one or both of two things happen: firstly a really massive increase in house building and secondly a huge rise in forced sales where the seller must sell at any price.

Also, when you look at the overall cost of a house purchase transaction you may just see that remaining about the same; less on the house itself but more on the tax. So the only person who really benefits is the taxman.

What will be interesting in the coming months will be how the prices right at the very top fare under the new 7% rate for houses bought for over Â£2 million.

Then there is the topic of prices for maisonettes and flats, which saw a rise in the last Land Registry HPI. We could start seeing these continue to rise as larger homes become more unaffordable. Now that would not be good news as more first time buyers would be forced out of the housing market and more investors possibly attracted in.