Nationwide’s 1% fall in prices during February has now been mirrored by Halifax where the fall is slightly more at 1.5%. Between them this makes the average house worth about Â£164,088.50, a fall of Â£2,540.50 over the month.

As you can see from the graph, house prices have shown a remarkable resilience over the last year despite the dampening effects of the general economy. But during that time the general level of transactions has been very low and house prices skewed by only about 7% of postcode areas. 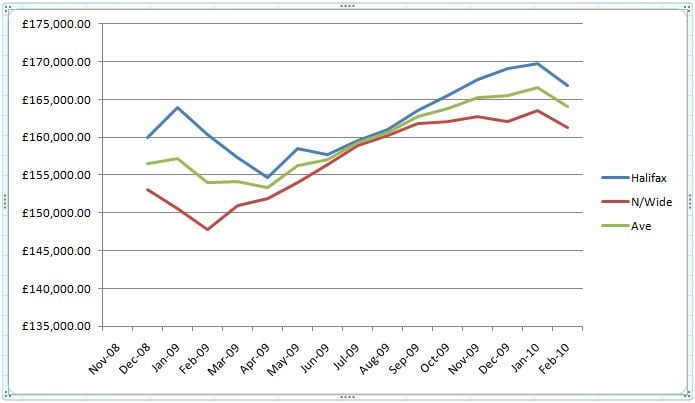 Halifax seems to be laying the blame mainly on the end of the stamp duty holiday, which really only helped a part of the market as well as the bad January weather that may have kept people away. But they also acknowledge that there had also been a slight increase in supply over demand.

Over the same period we have also seen though an increase in not only the number of mortgage products available to borrowers but also in the attractiveness of some mortgage deals. But it does not matter if only a relatively small number of people actually qualify for these mortgages under the more stringent lending criteria. That may explain why the number of mortgage approvals fell in January.

One can argue that a one in a hundred years snow fall will affect peoples’ enthusiasm for and ability to go house viewing. But if I were a seller I would hang on until the weather improves. So why would house prices drop because of a one off weather blip? Does it make the seller decide to accept a lower price or make a buyer bid lower?

The stamp duty holiday only affected property transaction where the agreed price was between Â£125,000 and Â£175,000 within the 1% bracket. The average house price is at the top end of that range so I would surmise that many houses were bought and sold where the stamp duty holiday was not even a consideration.

With weak mortgage lending, fears about redundancy, effective wage freezes (except MPs) and the threat of UK sovereign debt becoming more expensive so increasing mortgage rates one can really only see a continuing of the downward trend. Many would argue that a ‘crash’ is imminent, but as we have seen in the past, house prices are more like that tanker whose course takes much time and effort to change. House prices will only suffer an immediate crash if there is a sudden deluge of forced sales on the market and no buyers. But in the UK there is always someone with the readies to buy at a price that is right for them and usually sooner rather than later in case they miss out.

100% LTV mortgages are back

UK mortgage holders pay too much