The price of an average house is now Â£164,389 according to Nationwide.

Robert Gardner, the lender’s Chief Economist, said “UK house prices declined for the fourth time in five months in July, with prices falling by 0.7%. This pushed the annual pace of price growth down to -2.6%, from -1.5% in June – the weakest outturn since August 2009.”

He then went on to say that this was ‘unsurprising’ given the woes in the wider economy but also said that this could not be wholly blamed on the extra bank holiday and unusually wet weather.

The only good news in all this he said was that UK house prices had only slipped 13% from their peak, which was far less than countries like the Netherlands, the USA and Spain.

Then of course there is the relatively high level of inflation over the previous months that house prices cannot keep up with. House prices are not even now matching any wage increases either.

But standing back and looking at the big picture and comparing the leading Indexes (Nationwide, Halifax, Land Registry and Rightmove asking prices) we can see that in the round real house prices are just about moving sideways with any drift being marginally down and that asking prices seem to be drifting slightly higher, as can be seen from this graph. 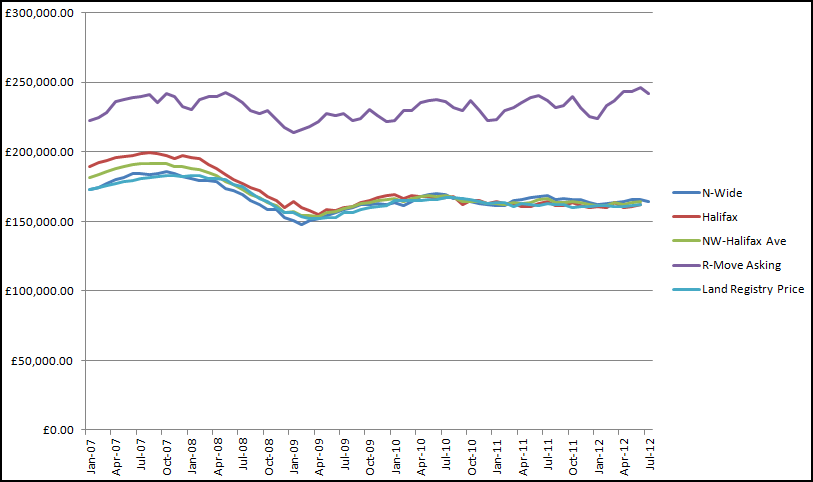 Even when the graph is expanded show the snake pit of movement of the Halifax, Nationwide and Land Registry indexes there is no real trend either up nor down as shown below.

With an inadequate house building programme and the new government backed Funding for Lending Scheme it looks like we’ll see a continuation of the status quo for now. Unless a mass of forced sales enters the market as the economy worsens and lenders are forced to become less forgiving.