According to the latest house price index (HPI) from the Nationwide building society house prices have jumped by 10.9 percent over the last 12 months and by 1.2 percent in April.

The average house price according to the lender is now £183,577.

It should also be pointed out that the Nationwide HPI covers the UK and the Land Registry only England & Wales but the mismatch is still interesting when you consider the expanded graph of the main HPIs below.

Nationwide points out that much of the upturn in the house prices is due to the strength of the market in London and the South East and the Land Registry put the annual growth figure at 12.4 percent in London alone. 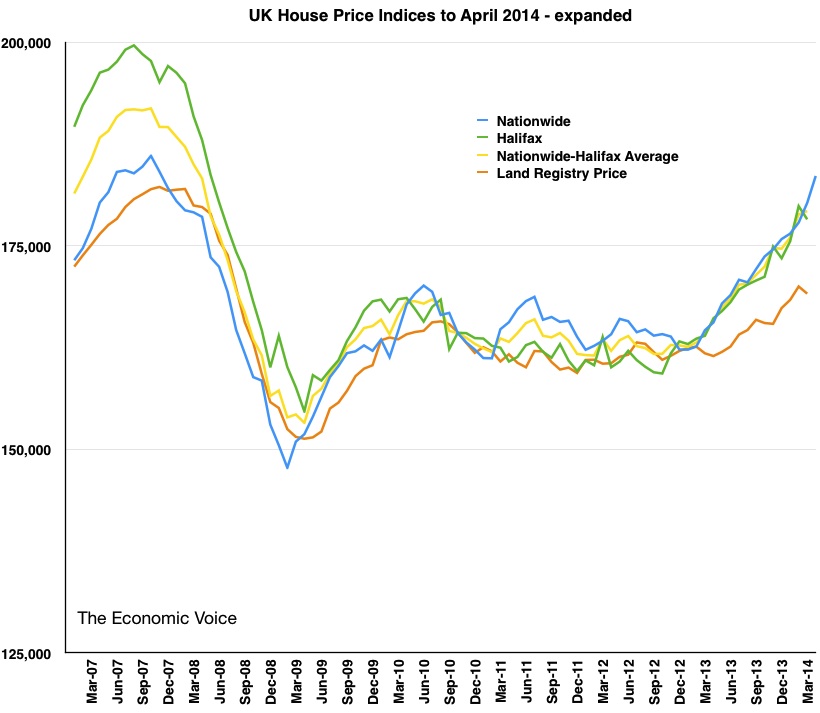 Looking at how the average prices of properties purchased using a mortgage has rocketed compared to that where cash sales are also included could indicate that much of the house price growth is mortgage fuelled, with obvious worries about the formation of a housing bubble. This worry is reinforced when looking at the Nationwide's figures and graph on the house price to earnings ratio, which is still well above the long term average despite the credit crunch and recently rising fast.

"The introduction of Mortgage Market Review (MMR) measures could have an impact on activity levels in the months ahead as the new measures bed down. However, underlying demand is likely to remain robust, as mortgage rates remain close to all-time lows and as consumer confidence improves further on the back of stronger labour market conditions and the brighter economic outlook.

"Earnings growth is beginning to pick up, with wage increases finally outpacing the rise in the cost of living in February. Nevertheless, house price growth is outstripping income growth by a wide margin. The risk is that unless supply accelerates significantly, affordability will become stretched."

He went on to say that new home construction was still lagging by 40 percent behind what was needed but that MMR should help keep a lid on price rises being driven by a supply/demand imbalance.