Average house prices rose by 1.7 percent in July according to the latest Land Registry data, as well as rising by 7.2 percent over the previous 12 months.

The price rises, although muted compared to other recent data, are still outstripping inflation and wage rises. The land Registry prices are still lagging those seen by the lenders (graph below), a trend that started in early 2013.

According to the Land Registry there were price rises across the board on all property types between July 2013 and July 2014 with flats/maisonettes seeing the largest increase of 9.2 percent and detached houses the smallest at 6.3 percent.

London of course led the way in price rises with monthly and annual increases of 3.3 percent and 19.3 percent respectively.

Yorkshire and Humber experienced the the worst monthly performance with price falls of 0.6 percent while the North East saw the lowest annual increase with just 2 percent. 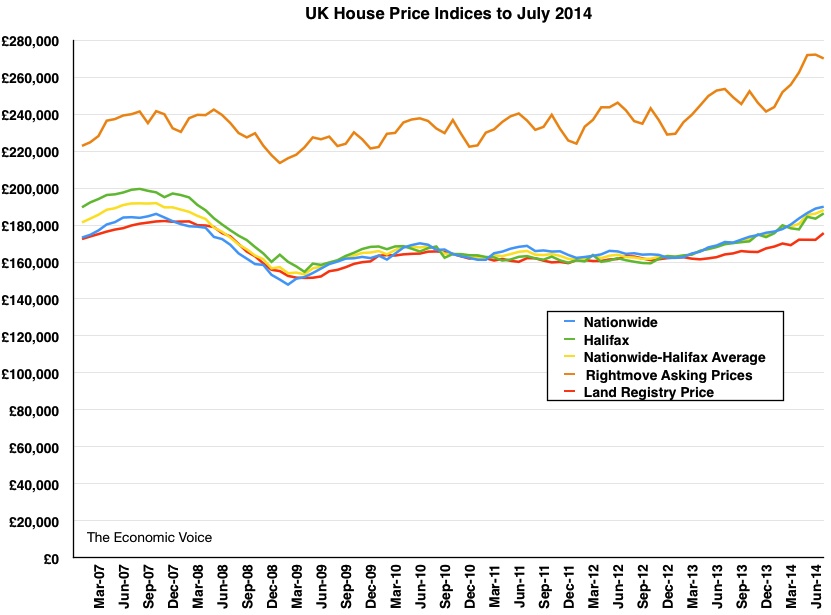 "Latest house price figures align with growing views that the foot is coming off the gas in the UK property market, as tighter mortgage regulations and rising house prices take their toll. Although prices continue to increase, the speed with which they do so has slowed compared to the start of the year, with Land Registry data showing that prices grew by only 1.7% since June, and even London only saw a increases of 3.3%.

"But even so, prices remain a hefty hurdle for first time buyers to leap and affordability remains a part of the critical issue. Although fewer in number, there are still some competitive mortgage deals on offer so it is vital that both first time buyers and existing home owners shop around. An interest rate rise is looming ever closer and the timing of the rise is key, given it will have a sizeable effect on affordability with wages so stagnant. Remortgaging has already jumped by 9% in July amid fears of an imminent rate rise, and we fully expect this trend to continue throughout the latter half of the year.*

"Continued lender support to First Time Buyers through Help to Buy and high LTV lending along with an increase in house building will help shift the balance between supply and demand – signs of which we are now beginning to see."