On a monthly basis however house prices remained flat across England and Wales, but in London they rose by 0.7 Percent over the month and by 9.1 percent in the year to May.

House prices in Wales did not fare so well with prices decreasing by 1.7 percent in May and going down in the year to May by 0.6 percent. Although the South West of England as well as Yorkshire and the Humber both saw a monthly fall of 0.6 percent, year on year prices went up in those regions by 3.6 percent and 1.1 percent respectively.

Looking at the prices of different property types over the year, detached houses saw the biggest increase of 5.2 percent, followed by semi-detached houses increasing by 4.7 percent, then terraced at 4.5 percent and flats/maisonettes going up by 4 percent.

The house price graph below shows the latest available data of Nationwide, Halifax and the Land Registry HPI prices from before the credit crunch up to May 2015 and Rightmove asking prices to June 2015 (click on the graph to enlarge it). 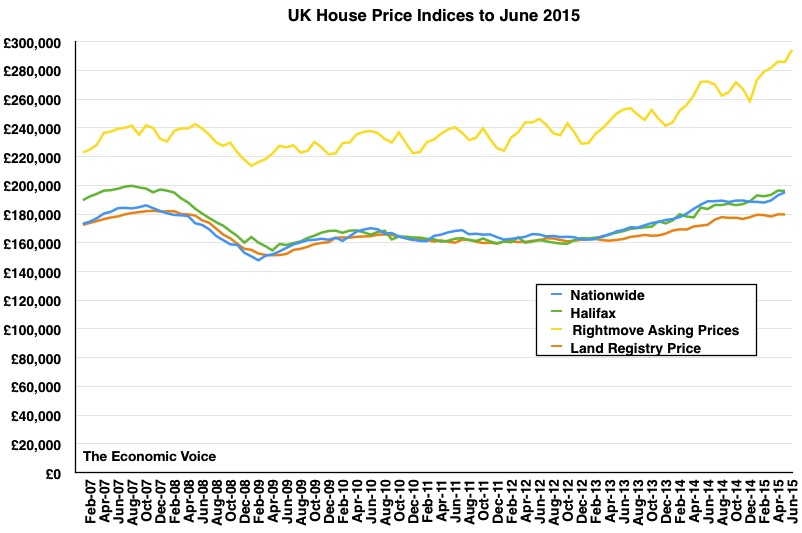 “Greater confidence following the election and a pre-summer boost to the market saw house prices rise by 4.6% year-on-year in May, with London and the South East driving the increase.

“It is also welcome to see areas outside this – the East and North East – experience a monthly increase. These areas were hard hit by the crash and many will only now be starting to see their property values return to previous prices. This means they may now finally escape being mortgage prisoners, offering the opportunity to remortgage and boost incomes.

“More worryingly, however, is that the average monthly number of property transactions has decreased substantially year on year from March 2014 to March 2015. We anticipate that figures later on in the year – particularly from May onwards – will see a rise but the market should not become complacent. Supply and affordable housing remains critical to the long-term security of the market and needs to be addressed.”

Spotlight back on Spanish debt, and commodity currencies take a hit

Buy the rumors, sell the facts. Is this the right time yet?

Current account deficits are the key to revival in emerging markets