House prices rise 9.7% in the last year says the Halifax

The latest House Price Index (HPI) from the Halifax shows that house prices have risen 9.7 percent in the 12 months to October 2015. The price of an average house stood at £205,240 in October said the lender.

On a monthly basis the change was a 1.1 percent increase and over the previous three months 2.8 percent was added to the value of the average house.

Looking at the house price graph below showing the main house price indexes, you can see that Rightmove, Halifax, Nationwide and the Land Registry are all recording house prices that are well above those seen just prior to the credit crunch. 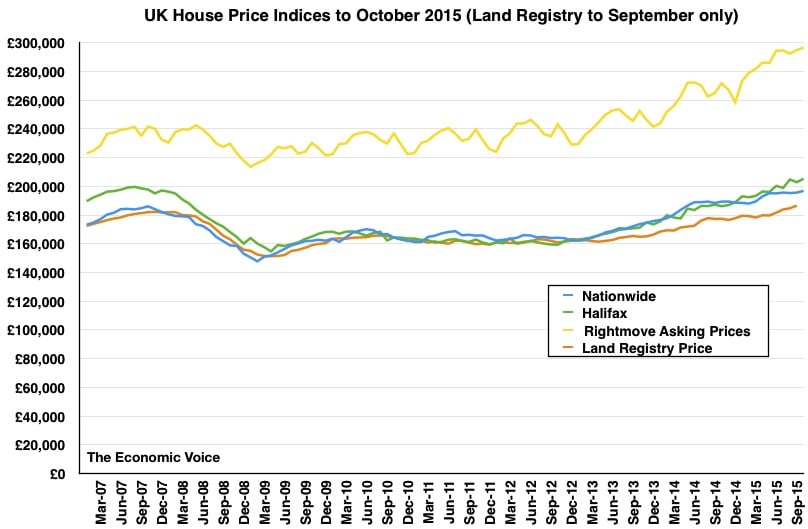 "House prices in the three months to October were 2.8% higher than in the previous three months. This was slightly above the average of 2.5% on this measure over the first nine months of the year. The annual rate increased from 8.6% in September to 9.7%.

"Improving economic conditions and household finances, together with sustained low mortgage rates, have boosted housing demand during 2015. Strengthening demand is filtering through in to higher sales levels although the ongoing shortage of supply is acting as a significant constraint on activity.

"The imbalance between supply and demand is likely to persist over the coming months, maintaining upward pressure on house prices."

"For all the talk of house price growth moderating, October was a bumper month for prices, growing at their fastest rate for over a year. Growth on this scale isn't sustainable, but wage increases and low inflation are bolstering household finances, helping to take some of the sting out of these increases. The diminishing prospect of an interest rate rise also means lenders are continuing to offer historically attractive rates to the market, which is good news for first time buyers and developers alike."