House prices in UK rise by 6.1 percent in the year to September 2015 says the ONS

The latest House Price Index from the Office for National Statistics (ONS) shows that the price of an average property rose by 6.1 percent in the twelve months to September 2015. This is an increase of 0.6 percent over the rise of 5.5 percent seen in the year to August 2015.

On a regional basis annual house price inflation was a hefty 10.2 percent in Northern Ireland, 6.4 percent in England and 1.1 percent in both wales and Scotland.

The east and South east of England saw rises of 8.4 percent and 7.4 percent respectively. When you exclude London and the South east house prices across the rest of the UK rose by 5 percent in the year to September 2015. 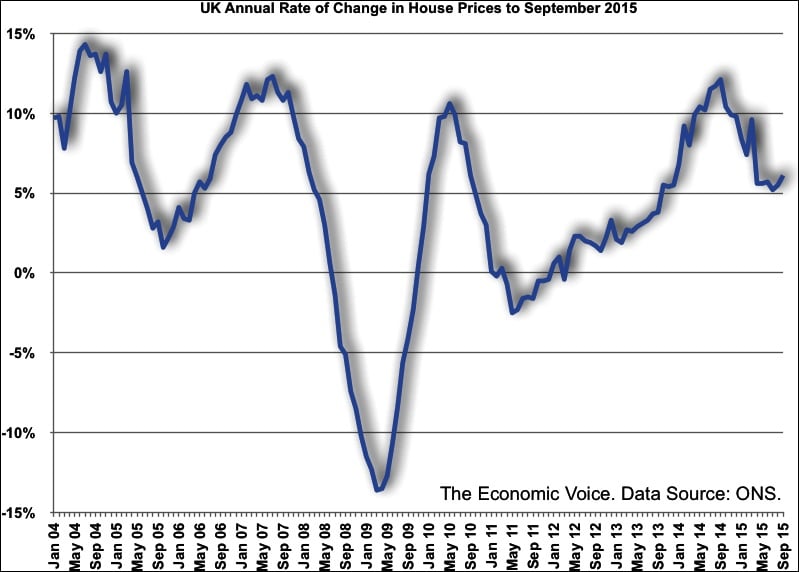 Looking at the monthly change, on a seasonally adjusted basis house prices rose by 0.8 percent between August and September 2015.

For first time buyers there was an increase on 4.3 percent compared to September 2014 and next time buyers saw a rise of 6.9 percent over the same period.

Frazer Fearnhead, Founder and CEO of The House Crowd, commented:

“The increase in house prices by 6.1% in the year to September 2015, up from 5.5% in the year to August, should maintain people’s confidence in investing in bricks and mortar.

“Again we see that house prices in the East and the South East have continued to rise at a faster rate than in the rest of the country. Although investors can make strong capital gains in these regions, northern cities are delivering stronger underlying rental yields.

“Whilst the ONS statistics instil confidence in property investment, the way in which people invest is likely to alter. Changes to how landlords’ income is taxed, as well as the impending introduction of the new EU mortgage credit directive, has made traditional buy-to-let a less favourable option. People are now seeking more accessible ways to invest in property, such as property crowdfunding, which negates significant financial deposits and opens up this investment vehicle to many.”