According to the Nationwide Building Society the price of an average house rose by 0.6% in February 2012 and now stands at 0.9% higher than a year ago.

Nationwide says that this may be down to the country’s economic situation being as bad as thought but others put it down to first time buyers wanting to beat the imminent end of the two year Stamp Duty Land Tax holiday on 24th March.

Nationwide also points to housing transactions being up 23% year on year and that UK mortgage approvals have risen by 36%, which is usually a good market leading indicator.

“However, it remains to be seen whether this trend will be sustained.” Said Nationwide’s chief economist, Robert Gardner “Given the still challenging economic backdrop this increase in housing market activity may be the result of a temporary rise in first time buyers entering the market to take advantage of the stamp duty holiday before it expires in March. If so, this may continue to support activity and prices in the near term before cooling over summer.”

This latest report from Nationwide comes hard on the heels of the Land Registry’s latest HPI that has house prices rising in January by 1.1% but falling on the year by 1%.

But, as I have always maintained, we should look at the overall trends. I have updated the HPI graph with the Nationwide data and show the exploded view of it below. You can see that the latest Land Registry and Nationwide upticks have been lost in the overall noise and that there is no consistent movement in average house prices in any one direction other than sideways. (Click on graph to expand it.) 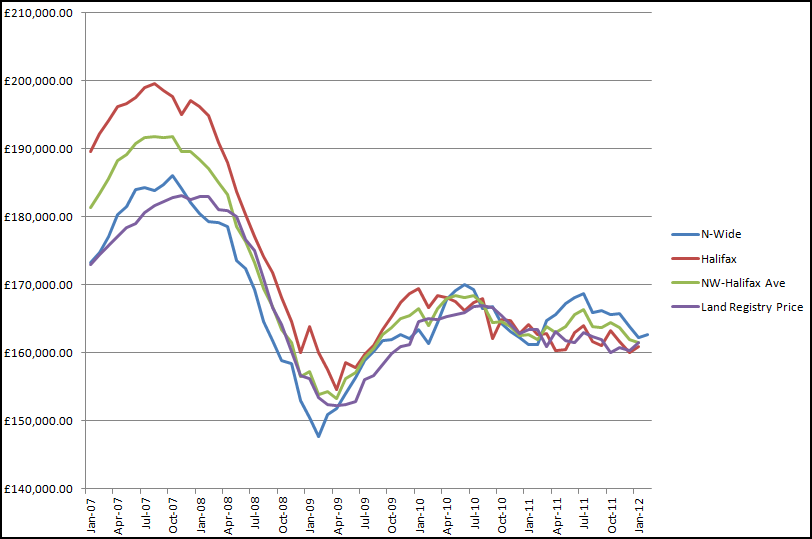 Nationwide does show however that the trend in owner-occupiers is now downwards. Up until the early 200s home ownership had been increasing from about 23% in 1918 to just over 70%. But in the last few years this has dropped back to some 66%.

Further, our own perception of us as a nation of homeowners isn’t all it seems. The UK comes out eighth behind Hungary, Spain, Greece, Italy, Belgium, Portugal and Ireland.