January's house price indices from the Halifax, Nationwide and Rightmove show a bit of a mixed picture and many people hang their hats on one or the other as the data is released.For example, in January Halifax said house prices rose 0.8% on the month, but Nationwide said average house prices dropped by 0.1%.

But when taken in the round and over the longer term a different picture can emerge. 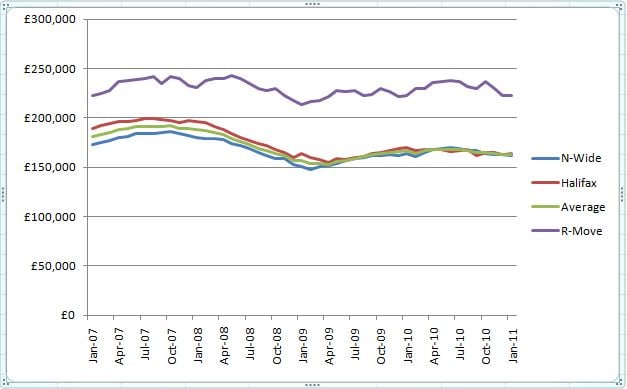 Looking at the graph of the three indices over the last three years up to Jan 2011 together with a Nationwide / Halifax average, we can see that house prices have not been swinging around massively. In fact it is the asking prices that have seen most of the short term swings.

Although in a decline at present the house price trend is in reality a gradual one.

Very recently the 'confidence factor' (the difference between Rightmove asking prices and what Nationawide and Halifax see) seems to have dropped. But that could change quickly should sellers believe they can get a better price.

The house builder Bellway has said that January was a good month, but also said that it was too early to tell where the year would take them. They sold 85 more houses in the six months ending January 2011, 2,332 in total but the average selling price for them increased from £155,871 to £168,000.

With property sales still sluggish this may be the new property market for the next few years. Relatively high prices slowly stagnating as the rest of the economy catches up.

My house is my pension

RICS says pre-fab homes may be the answer