Although the rate of house price increase appears to be slowing, as indicated by the latest Halifax house price index showing a 0.1% decline in prices between April and may 2015, on a three monthly basis prices are still rising. When looking at house prices on an annual basis prices are increasing at about 8-9 percent, which is far faster than earnings growth and the CPI.

There is also the matter of supply, Halifax cites the Royal Institution of Chartered Surveyors (RICS) monthly report saying that housing supply remains tight with available stock numbers ‘…fell further in April and is currently at its lowest level for many years’.

But confidence remains high for potential purchasers according to the Halifax Housing Market Confidence Tracker with the proportion of consumers who believe the next 12 months will be a good time to buy increased from +21 in March to +26 in April. Whereas those who thought it a good time to sell fell from +33 to +30. But the proportion of those who thought prices would rise as opposed to fall fell from +64 in March to +58 in April. 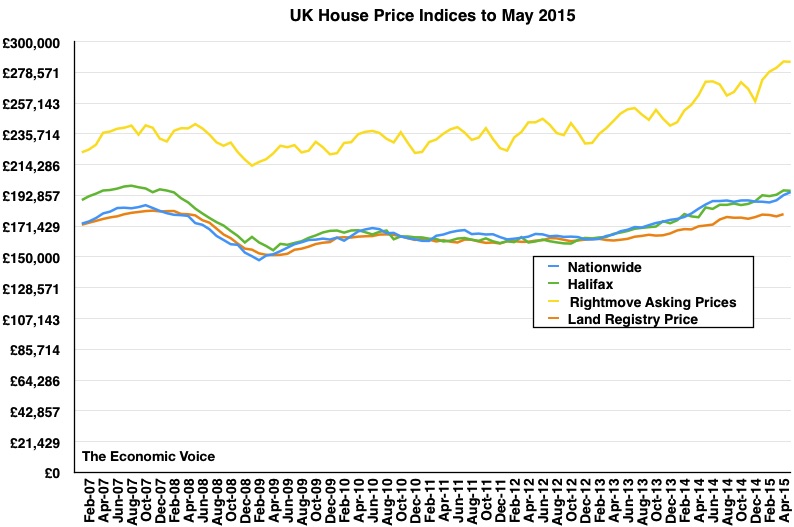 "House prices in the three months to May were 2.0% higher than in the preceding three months. This measure of the underlying rate of house price growth eased for the second consecutive month, falling to its lowest since January. Annual house price growth, however, rose marginally from 8.5% in April to 8.6% and continues to be in the narrow range of 8-9% where it has been throughout 2015 so far.

“Housing supply remains extremely tight with the stock of properties available for sale currently at its lowest level for many years. At the same time, ongoing economic recovery, increasing employment, real earnings growth and very low mortgage rates are all supporting housing demand. This combination has kept annual house price inflation well above earnings growth although activity levels are subdued.

”The imbalance between supply and demand is likely to continue to push up house prices over the coming months. Looking further ahead, the increasing level of house prices in relation to earnings is expected to dampen house price growth.”

Three Airline Stocks I Think Are Ready to Rebound