Although average house prices dropped by 1.2% over the month Nov to Dec (0.2% on a non-seasonally adjusted basis), they still rose by 1% over the course of 2011.

According to Robert Gardner, Nationwide’s Chief Economist, this small rise over the year showed that house prices had been ‘surprisingly resilient’ taking into account the state of the economy.

He also said that although demand was weak this was matched with weak supply, which managed to keep prices from sliding.

You can see from the following graph of the major indices how prices have fared over the last few years. 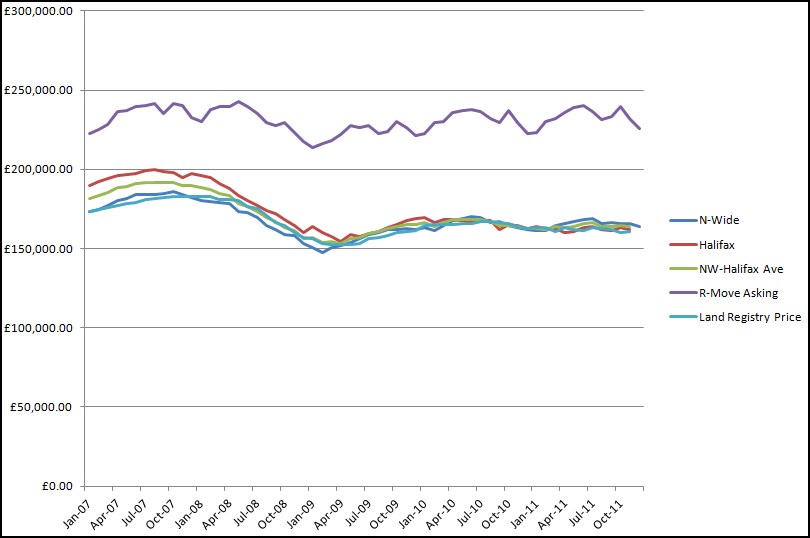 Robert Gardner also said that there was not much to look forward to in the form of market improvement in 2012 as there are many negative pressures on the economy.

“2012 isn’t shaping up to be much better than 2011, for the UK economy or the housing market. There is no sign of an end to the Eurozone crisis and, since the single currency area is the UK’s largest trade partner, this will continue to weigh on our export performance at a time when the UK is unusually reliant on international trade to drive its recovery.

Deteriorating labour market conditions and elevated inflation are already holding back household spending, while austerity measures are restraining public expenditure. Against this backdrop the UK economy is likely to expand by less than 1% again in 2012 – far below the 3% growth rates that were the norm before the onset of the financial crisis.”

He went on to say though that the uncertain economic climate may well put off buyers so hitting the demand side of the equation, which may tend to push prices lower. But with no indication of an upsurge in properties coming onto the market this demand/supply balance may well remain quite tight putting some support under prices.