• Home sales spiked by 21% in 6 months during 2013, biggest annual increase in the past decade

Property sales in the six months to September 2013 rose to their highest level since the start of housing downturn in 2007, according to new research by Lloyds Bank.

Regionally, there was remarkable consistency in property sales growth with a 23% rise in activity in both the North West and East Midlands between March and September 2012 and the same period in 2013. The lowest rise was 19% in the North East. The South East saw sales exceed 100,000 during the six months from March to September for the first time since 2007. 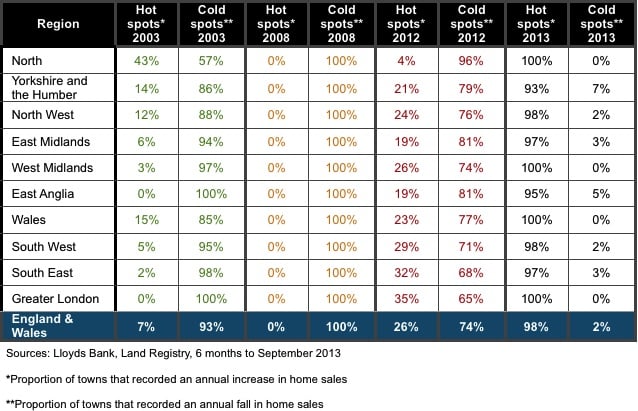 The number of towns in the survey recording a rise in sales in the six months to September 2013 increased to 98% of those surveyed, this compares with 26% in the same period a year earlier. 57% of the towns that saw a rise in home sales were in the south1 against 43% in the north2.

In four regions – North, West Midlands, Wales and London – 100% of towns in the survey recorded an increase in home sales; whilst 93% (the lowest) recorded a rise in Yorkshire and the Humber. (See Table 1) 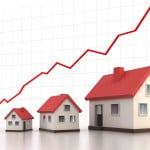 Newham saw the largest increase in home sales with a 62% rise in the six months to September The East London borough is followed by Redhill in Surrey where transactions increased by 56%, followed by Farnborough in Hampshire (52%), Salford in Greater Manchester (51%) and Walton on Thames in Elmbridge (50%). (See Table 2)

Crowborough in East Sussex saw the largest decline in home sales over the same period with transactions down by 10%, followed by Caterham in Surrey and Hyde in Greater Manchester (both recording a decline of 9%). Overall, six of the nine towns registering a decline in sales were in the south – though these were modest falls. (See Table 3)

House prices in the ten towns that saw the biggest increases in property sales stand at an average of 6.3 times local gross annual earnings. This is lower than the average multiple of 6.9 among the nine towns that recorded falls in property sales over the same period. There are, however, notable exceptions to this trend. For example, the average house price to average earnings multiple in the Hertfordshire town of Ware – where homes sales grew by almost a half is 7.3 – almost twice the ratio in Dewsbury (3.7) where transactions fell by 7%.

"Since spring 2013 housing activity in England and Wales has been on the rise, with home sales in the six months to September up by over a fifth compared to the same period a year earlier. This increase is the strongest on this basis in over a decade. In addition, the number of towns in the survey recording an increase in transactions has grown over three times compared to the same period in 2012.

"Low interest rates, improvements in consumer confidence and Government schemes, such as Help to Buy, all appear to have contributed to the rise in home sales." 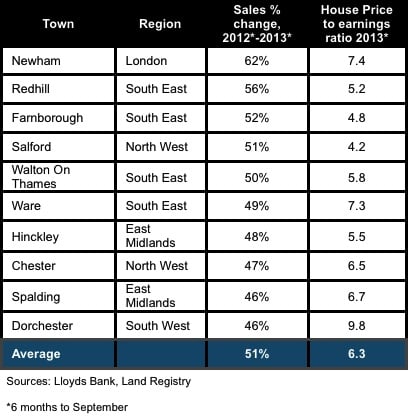 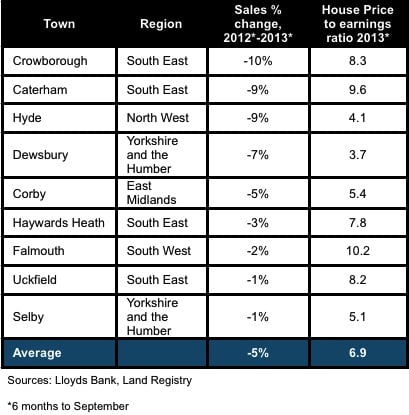 Thousands of women are criminalised needlessly, MPs and peers find