Our neighbor to the north is facing some headwinds. In Canada, there are troubles developing that may drive the country toward an economic slowdown. In 2008, the ripple effects from the U.S. economy into the global economy caused an economic slowdown in many countries. The Canadian economy was one of the few nations that didn’t suffer a major hit; it was able to stand strong.

Now, Canada may not be able to stay on such strong footing, as it faces a possibly severe economic slowdown due to a few phenomena that are starting to line up to create a perfect storm.

Secondly, the employment situation in Canada, another indicator of an economic slowdown, is becoming dismal. In December, Canada’s unemployment rate increased by 0.3% to stand at 7.2%. Jobs growth in the country was also very anemic in 2013. On average, 8,500 jobs were added each month in 2013. In 2012, this number was 25,900. The jobs growth rate has declined by more than 67% year-over-year. (Source: “Labour Force Survey, December 2013,” Statistics Canada web site, last accessed January 10, 2014.) 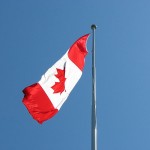 Flag of Canada by Andrew Tawker

Thirdly, household debt in Canada continues to increase, recently hitting an all-time high. In the third quarter, household debt compared to disposable income in Canada stood at 163.7%; in the second quarter, it was 163.1%. (Source: “Canadian household debt ratio climbs to record in third quarter as mortgage borrowing hits $1.13-trillion,” Financial Post, December 13, 2013.) Of course, increasing household debt could take the Canadian economy into an economic slowdown, because as households gather more debt, they have to make higher payments to service the debt, which causes a slowdown in consumer spending.

Last but not least, crude oil prices have been declining since September of 2013. Canada has become a major producer of oil. If oil prices remain suppressed, profitability declines, forcing producers to make changes to their operations, which could include mass lay-offs to control expenses. This could send the country toward an economic slowdown, as well.

But what does an economic slowdown mean to American investors?

This article How American Investors Can Profit from the Canadian Economy’s Demise was originally published at Daily Gains Letter.

Are IT contractors essential to UK businesses?