How Do You Eat Yours?

With millions of Brits ready to crack open their Easter eggs this Sunday, a survey by oral health charity the British Dental Health Foundation has discovered the majority of people plan to scoff their chocolaty treats down in one go.

The poll revealed more than a third (37 per cent) expect to devour their Easter eggs in one sitting.

Almost one in four (23 per cent) say they will snack on their Easter eggs across a number of days while one in seven (15 per cent) will be doing likewise by snacking on them throughout Easter Sunday.

Approximately 80 million chocolate eggs are sold annually in the UK, many of which will be consumed by children.

And while many parents might not be too keen to let their child gorge on the sugary treats for a few hours, Chief Executive of the British Dental Health Foundation, Dr Nigel Carter OBE, advises a balanced approach that will satisfy parents and children as well as their oral health.

Dr Carter explained: “It is better for children to eat sugary foods all together, rather than to spread eating them out over a few hours. Roughly one in four five-year-olds and one in three 12-year-olds suffer from tooth decay, so there is a very real need for parents to moderate their child's sweet consumption.

“Of course we want children to enjoy themselves at Easter. The trick is to find a middle ground. It is fine for children to have the odd sugary treat on a special occasion as long as they keep up their regular dental health routine. The key thing for parents to remember is that it is how often sugar is consumed, rather than how much sugar, which heightens the risk of tooth decay. 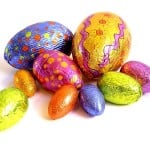 “Every time we eat or drink anything sugary, teeth are under attack for up to one hour. Saliva plays a major role in neutralising acid in the mouth, and it takes up to an hour for that to happen. If sweets are constantly being eaten, the mouth is constantly under attack and does not get the chance to recover. That is why one of the Foundation's key messages is to cut down on how often you have sugary foods and drinks.

The poll also showed that only one in four (25 per cent) are reducing the impact Easter eggs can have on teeth by eating them with mealtimes.

“Practical solutions such as keeping sweets and sugary snacks to mealtimes only throughout the week and supervising their brushing before they go to bed are good ways to ensure your child's oral health will not suffer long term damage. Limiting the number of Easter eggs your child has may also be worth considering,” Dr Carter added.

“Quite often the bars that come with the Easter eggs will contain caramel and sugary fondant that could stick to teeth. For this reason it is also worth bearing in mind the Foundation's message of brush your teeth for two minutes twice a day using a fluoride toothpaste. We would especially call for parents to ensure this is done before their child goes to bed.”

The 60th anniversary of the Treaty of Rome