How Green IT Can Save the Planet

Technology companies tend to be younger and more environmentally conscious than corporations that developed in an older, more industrial era.

So unlike in other sectors where conservationists tend to push along an agenda and then drag companies forward with them, tech firms are generally more interested in recycling materials, conserving energy, and generally attempting to have a smaller footprint as they seek profits.

This so-called "Green IT" movement has focused largely on replacing old servers and hardware with newer, more efficient systems. But there is a lot more to it. Lots of new IT processes and methods of doing business can greatly help end users save energy.

These are a few ways any company or user can conserve simply by using different tools. 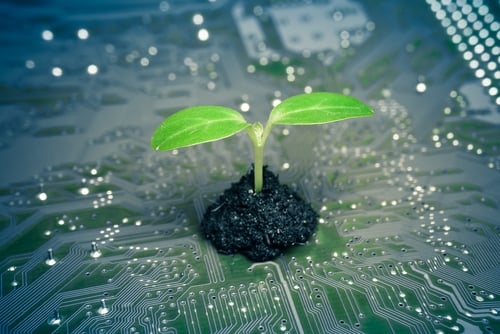 There are so many benefits to using the cloud for storage. And being green in this way will save both the planet and your bank account. Online cloud backup is one such environmental success story.

Why keep archival documents sitting around the building, taking up expensive office space? Worse still, you had to print out these files in the first place, needlessly using up paper and electricity.

Instead, keep your records as PDFs and store them on the cloud. Not only is is it better for Mother Nature, but this way everything will remain protected in the case of fire, flood, or natural disaster that could destroy physical files. It is more secure, greener, and often cheaper.

Most firms know the drill: Every few years (or months) you go clean out a giant closet full of fliers, promotional materials, and reports. Thousands of pieces of paper announcing a conference in 2013 that nobody even remembers are thrown away. Well, the days of printing huge quantities of marketing materials, brochures, and other documents "just in case" are coming to an end.

Print-on-demand is the reason. Today, eco-friendly printers all over the country offer the ability to print just what you need. Then, if you run out, you just print more. With some estimates saying that it takes up to 10 times more energy to produce a piece of paper than to print something on it, the environment will thank you for thinking of it first and ditching your unneeded overrun of brochures.

Why buy servers and other hardware when you can just virtualize them? Server virtualization comes down to masking resources from users and using it for other operations. In layman's terms, this means dividing a physical server into several "virtual environments" that better allocate all its resources. The result is very green, since virtualization is much more energy efficient — some say 10 times more energy efficient — than physical servers, since the extra capacity can be used by other processes rather than disappearing into the ether.

Citigroup is one company that has taken this concept to heart. Starting in 2005, the banking giant sought to drastically reduce its number of data centers from 52 energy-sucking locations to go lean and mean with just 14 in about five years time. As with other green computing tools, this isn't just about saving the earth — it helps companies save real money. "We don't do it just to be good corporate citizens," James Carney of Citigroup told Network World. "We do it because we can optimize our cost and efficiency."