How Japan’s Failure Can Be a Boon for Smart Investors

The Japanese economy has been in trouble for some time. The central bank of the country and the government of Japan have tried many different tactics to revive the economy. They have been struggling, with the interest rates in the Japanese economy being kept low to induce growth. Japan’s central bank has tried many different rounds of quantitative easing and failed, deflation became a problem, and growth isn’t there.

Now one must ask: what did Japan’s central bank and government anticipate actually happening in the Japanese economy? Is there inflation, and are they exporting to the global economy?

Well, it turns out they are failing at both.

Their goal of exporting more to the global economy isn’t panning out as they expected. According to the Japanese Ministry of Finance’s customs data, the trade deficit (more imports than exports) of the Japanese economy in September was 33% higher than the previous month, standing at 1.09 trillion yen, compared to 820 billion yen in August. (Source: “Seasonally adjusted Values for September 2013 [Provisional],” Ministry of Finance Japan web site, last accessed October 21, 2013.)

So what’s happening on the inflation front?

Not too long ago, the central bank of Japan stated that it wants inflation to be around two percent in the Japanese economy. In August, prices in the Japanese economy increased by 0.8 % after increasing 0.7% in July, marking the third straight increase. But hold on; there’s a catch! The majority of the increase in inflation came due to rising fuel prices and a weak Japanese yen. (Source: Kihara, L., “Japan inflation hits five year-high, wage gains needed to decisively end deflation,” Reuters web site, September 27, 2013.)

To me, this means that the efforts by the government and the central bank aren’t exactly working. I can only wonder what’s next. 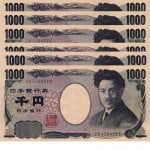 Over time, one thing has become very clear: the Japanese central bank has been favoring money as a solution. If the economic misery in the country continues, then I wouldn’t be surprised to see the central bank and the government continue to print money in hopes of providing a boost to the Japanese economy.

In their previous effort to improve the economic conditions, we saw the Japanese yen collapse and the stock market soar in a very short period of time.

If all the pieces of the puzzle come together and we hear more promises of printing, then the trade will be very simple; the Japanese yen will be bearish, and the Japanese stock market will be bullish.

Investors here in the U.S. economy can take advantage of this situation through exchange-traded funds (ETFs) like the iShares MSCI Japan (NYSEArca/EWJ), which invests in companies in the Japanese economy, and CurrencyShares Japanese Yen Trust (NYSEArca/FXY), which tracks the performance of the yen. With these ETFs, shorting would provide investors with gains.

This article How Japan’s Failure Can Be a Boon for Smart Investors by Mohammad Zulfiqar, BA was originally published at Daily Gains Letter