As Congress has come to a decision about the debt ceiling and kicked the can a few months down the road, I hear a significant amount of noise about the U.S. dollar losing its reserve currency status.

With this, I ask: could this really happen anytime soon?

Before coming to any conclusions, let’s dive into the basics. A reserve currency is the currency that is commonly used in the global economy; central banks keep it in their foreign exchange reserves and businesses do international transactions with it. One of the other characteristics of the reserve currency is that it is thought to be able to remain strong and stable over time. Currently, the U.S. dollar holds reserve currency status.

You see, over the past few years, and especially since the financial crisis, the fundamentals of the U.S. dollar have gone downhill. The U.S. dollar is losing its stability and strength; for example, look at the long-term chart below of the U.S. dollar compared to other currencies in the global economy. You will see there’s a clear downtrend. 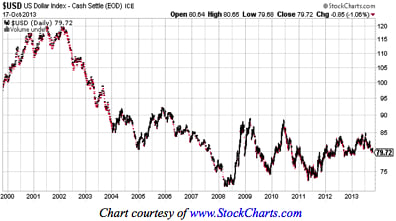 But this is just the picture of what has happened in the past. Going forward, the fundamentals are deteriorating further, and the speed at which it’s happening is picking up the pace as well.

To begin with, we have increasing national debt. It’s not very commonly said in the mainstream, but the U.S. government has the most debt, in nominal terms, than any other country in the global economy. And after Congress came to a consensus, it pretty much promised it would increase further—we will probably see such an increase in January. The debt of the U.S. economy is increasing more than the income—not a sustainable trend.

Then we have the continuous printing of the U.S. dollar through quantitative easing. Currently, the Federal Reserve prints $85.0 billion a month in hopes of economic growth. You have to keep in mind that the more it prints, the lesser the value of the U.S. dollar will become due to its abundant supply.

All things considered, one thing that should also be kept in mind is that the reserve currency changes over time. Those who are familiar with history will know that the British sterling pound was considered a reserve currency not too long ago, before the U.S. dollar took that status after World War II.

It could take many years before the U.S. dollar loses its reserve currency status. But here’s what I think: at their cores, all currencies around the world are operating on the same principle of printing more. Maybe we will need a new currency that is backed by something. But in the meantime, I’d say gold will be able to save investors’ portfolio from all the unwarranted volatility in the foreign exchange markets.

This article How Long Until the U.S. Dollar Loses Its Reserve Currency Status? by Mohammad Zulfiqar, BA was originally published at Daily Gains Letter

So this is where bankers' bonuses come from