It is always interesting to look at property and house prices from a different perspective. So we have constructed a rough and ready graph that indicates how many ounces of gold it would have taken to purchase the average house on a month by month basis since January 2007.

What it shows is that anyone who sold at the top of the market just before the credit crunch and gambled the whole shebang on gold and held it for the duration would now be able to buy two houses and have cash to spare for a bit of renovation (or a luxury car or a long holiday in the sun maybe). 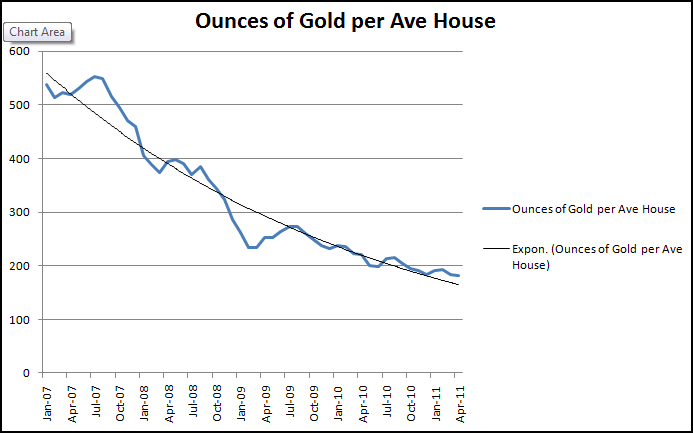 An average house in ounces of gold-click to enlarge

It would though have taken a very brave person to do that!

Then of course had you sold your house you would gave had to rent a place to live as well as paying for all those gold storage fees (or pay for a massive safe to be installed at home). Then there's the selling and later buying fees as well as stamp duty.

On top of that there's the removals and upheaval ………. on second thoughts I think it might have been better just to stay put and not take the risks or suffer the disturbance!

Would have been a good windfall though.

The graph was produced using the Land Registry house price index data and monthly gold prices in GBP from The World Gold Council.

Labour? LibDem? Conservative? Other? Who would you choose in June 2011? Vote in the new poll HERE!

myhomemove comments on the anniversary of the mortgage market