How Old Economy Stocks Like These Can Make Investing Easier

Among the many realities in a slow-growth economy, some traditional, old economy businesses continue to impress with their ability to increase revenue and earnings. It’s no small feat to grow sales by double digits these days; but this company is doing it, and it’s about as “old economy” as you can get.

At the beginning of this year, we considered A. O. Smith Corporation (AOS). Based in Milwaukee, this company is in the water heater business. It isn’t fancy, and it won’t ever make front-page news, but this is a good business. It’s proven to be a good moneymaker, and it’s consistent.

According to the company, its third-quarter sales grew to $536.2 million for a gain of 16% over the comparable quarter last year. Management cited improving business conditions in new home construction and some improvement in replacement demand for water heaters as reasons for the growth.

Earnings came in at $46.2 million, or $0.50 per share, compared to $37.0 million, or $0.40 per share, in the comparable quarter. Both sales and earnings beat Wall Street consensus. The company’s long-term stock chart is featured below: 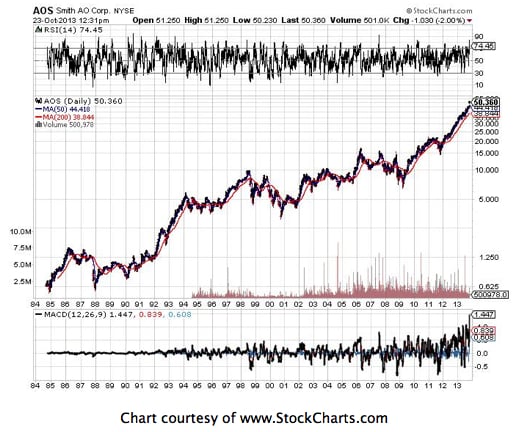 I really like finding businesses like A. O. Smith; and often, they are old economy. (See “Why These Old Economy Stocks Are Absolutely Crucial.”) They are companies that execute carefully and diligently, not operating with visions of grandeur but to provide consistent and reasonable shareholder returns from a mature industry.

Another company that falls into the category of consistent wealth creation is AAON, Inc. (AAON). This Tulsa, Oklahoma firm sells heating, ventilation, and air conditioning (HVAC) equipment to industrial customers.

Business is holding up pretty well, as the company’s latest earnings report (for the second quarter of 2013) showed record results.

The company said second-quarter sales grew to $91.2 million, up from $83.3 million in the comparable quarter. Earnings were $12.1 million for a gain of 30% over the same quarter last year. The shares recently split three-for-two in July, and the position just hit a split-adjusted all-time record high on the stock market of $28.00 a share.

It’s difficult to imagine solid financial growth from such old economy businesses, but it’s happening, and these two companies boast solid prospects for continued growth through 2014.

In most cases, I find it more useful for equity investors to go with existing winners over employing the buy low/sell high investment strategy. A company’s share price is typically way down for a reason and betting on a business turnaround is difficult in that you also have to bet on whether other investors will be willing to return to the story.

A successful business with a proven track record of operational success and wealth creation on the stock market already has a solid following.

10 Years on from the Global Financial Crisis in 10 Charts