How to Hedge Against a Stalling Global Economy

The stock market charts are showing some hesitation once again following the recent technical breaks to new record-highs for the S&P 500 and Dow Jones Industrial Average.

On the charts, the blue chip DOW is back below 17,000. The continued failure to hold after breaking above 17,000 for the fifth time is a red flag that suggests more weakness and vulnerability could be in the works for the stock market on the horizon, based on my technical analysis.

Small-cap stocks are also subject to some selling again with the Russell 2000 declining to below both its 50-day and 200-day moving averages on Monday morning. The breach of the moving average is worrisome. The index will need to find support at current levels or risk a fall to the 1,140 level.

You may be seeing targets for the S&P 500 rise, but I feel there could likely be some pausing and weakness ahead of this.

The surfacing of soft economic news for the global economy is a concern for economies worldwide, including the U.S. economy, and overall economic growth. 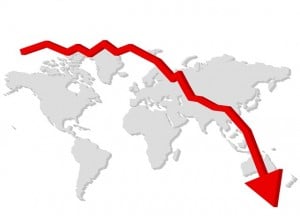 The European Central Bank (ECB) recently launched fresh stimulus for the eurozone. Clearly, this is needed. The Organisation for Economic Co-operation and Development (OECD) just cut its outlook for the eurozone's gross domestic product (GDP) growth, revising it to a paltry 0.8% this year and 1.1% for 2015. Folks, this is weak and in my view, it indicates a global economy that remains on fragile legs. The increased economic sanctions on Russia are clearly having an impact on the economy and its effects could worsen.

The OECD also slashed its outlook for U.S. economic growth to 2.1% for this year, which means we could be heading for a bad third and fourth quarter. Based on the second GDP reading we saw for the second quarter of 4.2%, it doesn't look good. Of course, this downward revision could also mean the Federal Reserve will hold off on raising interest rates until later in 2015. The central bank will meet today, at which point I expect the monthly bond buying to be considered and cut by another $10.0 billion to $15.0 billion, but the focus will be on its strategy for interest rates.

Another concern that arose on Monday was continued evidence of slowing in the Chinese economy. In China, the industrial production for August increased at its slowest pace in more than five years, as did the retail sales metric. Consumer spending is a significant part of the Chinese government's 10-year plan, so any weakness here is a red flag. The OECD pegs China to grow at 7.4% this year, followed by 7.3% in 2015, which is not the trend we want to see.

Moreover, the OECD estimates that Japan, despite its massive stimulus strategy, will see its GDP growth come in at a mere 0.9% this year and 1.1% in 2015. Clearly, the government increasing the sales tax to help fund its aggressive monetary plan is hurting the GDP and will impact the stock market.

So here's the deal: In my view, there is no catalyst for the stock market to rise higher at this time. Investors should watch for a potential downside stock market correction that they can hedge against through the use of put options on stock positions of the key stock market indices.

This article How to Hedge Against a Stalling Global Economy was originally published at Daily Gains Letter.

'Trickle-Down' does not work says PositiveMoney