How to Play the Strong GDP Growth

Now I realize this is only the advance reading and things can change over the next few weeks as more credible estimates come into play, but I'm sure the Federal Reserve is keeping close tabs on the numbers. Investors are also likely quite nervous.

It appears that the weak showing in the first-quarter GDP was an aberration, driven by the extreme winter conditions. But the reality is that if the GDP continues to expand at this pace, we could see the Federal Reserve begin to increase interest rates quicker than expected in 2015.

The GDP reading saw gains across the board in consumption, investment, exports, imports, and government spending, which will catch the eye of the Federal Reserve.

We know the Federal Reserve doesn't want to slow the economic renewal, but at the same time, it also wants to make sure inflation doesn't rise too fast.

The report from the BEA pointed to the fact that the price index for gross domestic purchases used as a measure of inflation increased an annualized 1.9% in the second quarter, well above the 1.4% in the first quarter. Even when you take out the volatile food and energy components, the reading increased 1.7%, versus 1.3% in the first quarter. 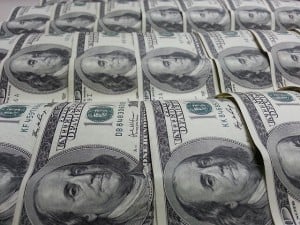 And given that the jobs numbers continue to show progress with the unemployment rate standing at a healthy 6.1% in June, you have to wonder when the Federal Reserve will begin to increase interest rates. If the jobless rate falls again in July, I truly think interest rates could be heading higher sooner than the mid-2015 target set by pundits for the Federal Reserve to take action.

So while we cannot hypothesize when interest rates are heading higher, what I do know is it's more a question of when and not if.

Once the bond buying is eliminated, which will likely be October, the Federal Reserve will then set its sights on interest rates and when best to begin to raise them.

Given the massive buildup of debt across the country in government, corporations, and personal debt, higher interest rates will translate into higher carrying costs.

Higher rates will also lead to higher interest paid on debt and rising yields, which means we could see a shift of some capital away from the stock market and into interest-bearing debt.

Given this, you should look at adding some corporate bonds to your portfolio to take advantage of higher interest rates. The better the quality of the bond, the lower the yield received; the lower the quality of the bond, the higher the yield to compensate for the risk. Municipal, state, and federal bonds may also make some sense in this environment.

This article How to Play the Strong GDP Growth was originally posted at Dail Gains Letter.

CALA Homes Pitch In For Penicuik