How to Profit as Eurozone Repeats 2009 Financial Crisis

When troubles first started in the eurozone years ago, they stemmed from the credit market. The amount of bad loans increased and as a result, banks needed to be bailed out. Greece and Ireland were the first in the eurozone to come under scrutiny, followed by Spain and Portugal; concerns later grew over whether Italy needed a bailout, as well. In 2012 and 2013, we saw a little calm in the eurozone. One of the main factors behind this was the European Central Bank (ECB). It said it will do whatever it takes to save the eurozone. This sent a wave of optimism through the global economy.

Now, we are starting to hear the problems—bad loans—remain in the common currency region…and they’re increasing.

The Bank of Spain’s data showed that bad loans in the country grew to a record-high in November. They stood at 13.08% then, compared to 12.99% just a month earlier. Month-over-month, bad loans in the fourth-biggest eurozone economy grew by 1.5 billion euros. (Source: “CORRECTED-Spain's bad loans ratio reaches new record high at 13.08 pct in Nov,” Reuters, January 17, 2014.) 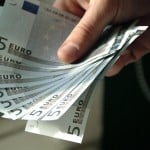 Banks in Italy—the third-biggest economy in the eurozone—are going through something similar. Standard & Poor’s expects bad loans at the Italian banks to increase to 310 billion–320 billion euros by the end of 2014. This would be similar to 18% of all loans. (Source: “Full recovery a long way off for Italian banks -S&P,” Reuters, January 21, 2014.)

Greece—one of the early victims of the debt problems in the eurozone—hasn’t really shown much improvement. According to an analysis by Pricewaterhouse Coopers, the percentage of bad loans compared to all loans in the Greek economy will increase to 40% this year. The Bank of Greece, at the end of June, said loans that were overdue by three months made up 29.3% of all loans. (Source: “Bad Loans Overwhelm Greek Banks,” Greek Reporter, January 22, 2014.)

Looking at all this, one must ask if there’s another financial crisis waiting to happen in the eurozone. Time will draw a better picture, but all of these problems arising in the eurozone are creating an investment opportunity for investors here in the U.S. Take a look at the chart below.

The chart above shows the price action in iShares MSCI Europe Financials (NASDAQGIDS/EUFN), an exchange-traded fund (ETF) that tracks the performance of the banking sector in Europe. Since mid-January, this ETF has been declining. Recently, it posted its biggest volume since its inception on the day when prices declined. It’s an indicator that investors are selling in weakness.

If the momentum in this ETF continues to the downside, investors here in the U.S. may be able to profit by shorting it.

This article How to Profit as Eurozone Repeats 2009 Financial Crisis by Mohammad Zulfiqar, BA was originally published at Daily Gains Letter.