How to Profit from China's Economic Slowdown

There's a significant amount of pessimism towards the Chinese economy these days, and the reasons behind this are very understandable. The economic data suggests the country is headed toward an economic slowdown.

In 2013, China's gross domestic product (GDP) grew by 7.7%—barely better than the previous year and the estimates that were calling for the lowest growth rate since 1999. (Source: Yao, K. and Wang, A., "China's 2013 economic growth dodges 14-year low but further slowing seen," Reuters, January 20, 2014.) Keep in mind that despite beating the estimates, this GDP growth rate is much lower than the country's historical average.

This isn't all. A credit crunch is also in the making. We are now hearing how companies in China will have troubles paying their interest on the bonds they have issued. So far, we have seen one default on payment by Shanghai Chaori Solar Energy Science & Technology Co. This solar company, based in China, defaulted on a $14.7-million interest payment on bonds it issued two years ago. (Source: Wei, L., McMahon, D. and Ma, W., "Chinese Firm's Bond Default May Not Be the Last," The Wall Street Journal, March 9, 2014.)

Before this default, there was a slight hope that the government would come in and bail out the troubled companies—something that happened in the U.S. economy during the financial crisis in 2008. Now, with this default, there are speculations that we will see more of the same.

Furthermore, there are concerns that property values in the Chinese economy are going to see a correction. Over the past few years, there has been the mass development of ghost towns—these are cities that have been built with massive infrastructure, yet very few people are living there. It shows there's a massive amount of supply in the property market—which, of course, results in lower prices.

In spite of the negativity towards China in the mainstream, I remain bullish on the country and believe investors may do very well there. 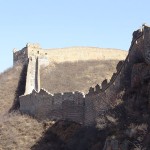 Certainly, there are troubles that will come in the way in the near future, but the long-term perspective looks good. Many investors forget that China has the biggest population in the world and the middle class in the country continues to grow.

The recent troubles, according to my analysis, will create havoc in Chinese stocks in the short term, but they will also create buying opportunities in the well-known names that have massive market share.

Take China Mobile Limited (NYSE/CHL), for example; since the third quarter of 2013, the company's stock price has declined roughly 20%. Recently, the stock broke below its long-term support level, and it may go down further. China Mobile has more than 700 million subscribers. To put this into perspective, that's more than twice the size of the American population.

As more economic news comes out of China, investors should make a list of major companies that operate in China and trade on the key stock indices here in the U.S. When there's a sell-off, certain companies get punished for no apparent reason—and that's when they are worth buying. Chinese companies will be no different.

This article How to Profit from China's Economic Slowdown by Mohammad Zulfiqar, BA was originally published at Daily Gains Letter.

Use Direct Marketing to Increase Your Video Sales